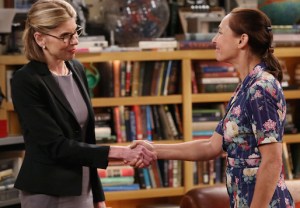 We always suspected The Big Bang Theory‘s Beverly Hofstadter (Christine Baranski) and Mary Cooper (Laurie Metcalf) would mix about as well as bleach and ammonia, but who could’ve predicted their first meeting would dissolve into a full-on argument about their favorite “Jewish bearded guys” (AKA Freud vs. Jesus Christ)?

On Thursday’s episode, the women responsible for Leonard and Sheldon were (finally!) brought together to commemorate their sons’ upcoming award for a physics paper. Of course, the celebratory nature of their drop-by was practically a moot point.

Beverly has never been a source of maternal warmth, and her unwillingness to show even an inch of fondness towards Leonard finally came to a head. After seeming more enthralled by stories of a young Sheldon’s business deals with an African warlord than her own son’s accomplishments, a jealous Leonard called his friend out for eating up his mother’s regards. While the roommates fought, Beverly was busy disregarding Mary’s East Texan “Bible babble,” referring to her Christian beliefs as superstition; in turn, Mary referred to Mrs. Hofstadter’s work in psychiatry as “bull dropped on the barn floor.”

Before things got too heated, Sheldon took Beverly out for — what else? — a warm beverage, where she asked him if he might’ve grown up even more intelligent had he been raised in a reward-based environment like Leonard. While Sheldon assessed that Mary’s nurturing resulted in his brother and sister being “mouth-breathing idiots,” a loving childhood might’ve been exactly what Leonard required. Upon this realization, Beverly returned to her son to offer him the chance at a new relationship based on unconditional love. Unfortunately, the ensuing first hug was anything but endearing.

While the Apartment 4A gang dealt with mama drama, Bernadette was busy realizing that she had become a mother for Howard, Stuart and Raj, forcing her to address their childlike dependence. After Howard’s attempts to prove he isn’t as reliant on Bernadette as he was on his mother all but failed, the man-children broke into a rousing three-part harmony of Annie‘s “Hard Knock Life” amid their new household chores.

Though neither of tonight’s storylines wrapped up neatly, “The Maternal Combustion” was easily one of our favorite Big Bangs in recent memory. But enough about what we thought: What did you make of tonight’s early Mother’s Day gift of an episode? Sound off with your comments below.