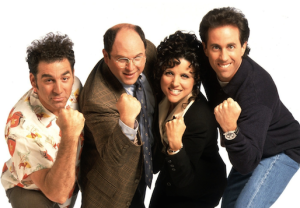 Starting in June, Hulu will be the only place you can stream any Seinfeld episode of your choosing — not that there’s anything wrong with that.

The streaming service also has inked a deal to exclusively host all new and upcoming scripted drama and comedy series from AMC, IFC, BBC AMERICA, SundanceTV and WE tv — including, of note, full seasons* of AMC’s summer 2015 Walking Dead spinoff, Fear the Walking Dead.

Announced as part of its Upfront presentation on Wednesday (and as first reported by our sister site Variety), Hulu ponied up some $180 million to acquire all 180 episodes of Seinfeld, which until now has only been available to stream online in drips and drabs, never anything close to the celebrated comedy’s entire catalog.

The deal with AMC Networks meanwhile finds Hulu hosting binge-able full seasons* of Fear the Walking Dead and other new/upcoming scripted shows, prior to the next season’s broadcast, plus exclusive and nonexclusive unscripted programming from WE tv and a number of films from the IFC Films collection.

* To be clear, if only because I myself was confused: Hulu is hosting full seasons at a time, at some point before the next season airs. This is not a “day after broadcast” streaming situation.