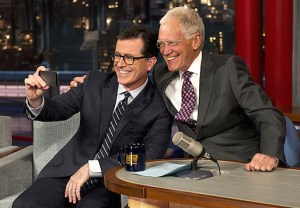 In an exclusive interview with The New York Times, Letterman revealed that he wasn’t consulted regarding his eventual successor on CBS’ Late Show.

“I always thought Jon Stewart would have been a good choice,” he said. “And then Stephen.”

Though Letterman is interested in seeing how Colbert plays opposite future time slot rivals Jimmy Fallon and Jimmy Kimmel, he acknowledges the need for more diverse voices in late night.

Asked whether it upset him that the Eye network didn’t ask for his input before ultimately going with Colbert, Letterman explained it was only initially irksome. Furthermore, the powers that be were quick to lock up his successor, not leaving much time for discussion.

“They didn’t have to put much thought to it, did they,” he quipped. “I think it was the very next day.”

Despite his slight beef with the network he’s called home for 22 years, Letterman said “it will be very interesting to see what [Colbert] will do.”

The Late Show with Stephen Colbert premieres Tuesday, September 8. Letterman signs off on Wednesday, May 20.