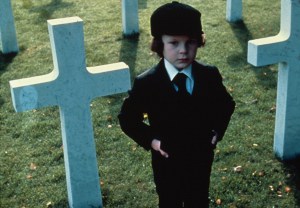 A&E had better cross its t’s (and bless ’em with holy water): Damien is headed to the cabler later this year.

The hour-long drama — described as a follow-up to the classic horror film The Omen — was ordered last summer for a six-episode first season at sister channel Lifetime. In its move to A&E, Damien is getting pumped up to 10 episodes.

A&E’s logline for the series, which has cast Bradley James (Merlin, Homeland) in the titular role, is as follows: “Damien follows the adult life of Damien Thorn, the mysterious child from the 1976 motion picture who has grown up seemingly unaware of the satanic forces around him. Haunted by his past, Damien must now come to terms with his true destiny — that he is the Antichrist. Barbara Hershey (Once Upon a Time) stars as Ann Rutledge, the world’s most powerful woman, who has been tasked with making sure Damien fulfills his destiny. Omid Abtahi (Better Call Saul) portrays Amani Golkar, a close colleague of Damien’s whose fierce loyalty will be tested when he realizes who his brother-in-arms actually is. Meganlyn Echikunwoke (House of Lies) plays Simone Baptiste, a woman whose life is thrown into turmoil when tragedy unexpectedly strikes.”

Rob Sharenow, executive vice president & general manager, A&E and Lifetime, explained in a release that the change in networks for the series, from executive producer Glen Mazzara (The Walking Dead), was prompted in part by Damien‘s compatibility with current A&E hit Bates Motel.

Will you be setting your DVR for Damien‘s hellish adventures? Sound off below!