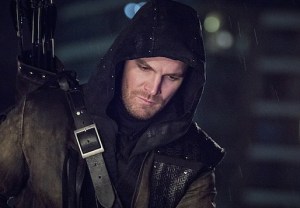 So began Arrow‘s first look at how Oliver, after three weeks of (herrrrrrb-influenced) indoctrination, has acclimated to his life with the League, as Al Sah-Him/Wareeth al Ghul. (The members’ laundry name tags must be huge!) To be fair, Stephen Amell himself warned us on the Twitter, “I’d like to apologize in advance for everything I do” in this week’s episode, and you can now see where he was coming from.

Oliver was not likeable (and surely not lovable, ha) in this new guise, following as he did Ra’s every command, right down to seeking out Nyssa on Starling City for the purpose of eliminating any rival heir to the demon. Lest you were on the fence about ol’ Wareeth al Ghul, he even kidnapped Baby Sara’s mom!

Fortunately, as Oliver got the 10-cent tour of Ra’s’ decimated former home (accompanied by a tale of his onetime alliance with Damien Dahrk, who ultimately parted ways with the League to lead a “hive” of operatives), far more watchable things were going on in Starling City. For one, we saw the depths of Laurel’s bond with Nyssa, 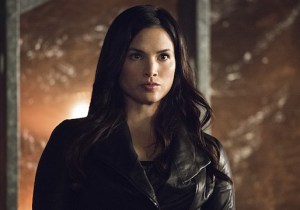 who has been training her. As such, Laurel takes great issue with the Oliver-led League’s plan to storm Starling and bring Nyssa back to Nanda Parbat for execution. Fittingly, it is Laurel’s Cisco-modified Canary Cry that interrupts Oliver’s first attack on Nyssa, on the rooftop where Sara herself was slain.

Thea meanwhile feels great guilt for the path Oliver was forced down because of her, and vows to do what she can to save him. To that end, capping a rather epic melee that pitted Diggle, double-fisting Lyla and Canary against Oliver and his henchmen, Thea put a speedy end to Oliver’s imminent slaying of Dig, with an arrow through her brother’s arm. (Let’s pray that even though she now knows Roy is alive, she for some reason stays put.)

Nyssa meanwhile was dragged away and brought back to Nanda Parbat, but not to be killed at Oliver’s hand. Rather, Ra’s stops Oliver mid-thrust and decides there’s a better use for his daughter’s blood — as the bride to the demon, by marrying Oliver.

As if an arranged marriage isn’t bad enough, Ra’s also revealed to us Nyssa’s secret agenda in retreating to Starling City: Not to exhume Sara and dunk her in the Lazarus Pit, but because she has been hiding the Alpha Omega bioweapon (as seen in the largely useless Hong Kong flashbacks). And as his final rite of passage, Wareeth al Ghul is to follow his wedding with the worst honeymoon plans ever, by unleashing the toxin on Starling City and destroying his home. Lovely tradition that, Ra’s.

What did you think of this week’s episode, “Al Sah-Him”?