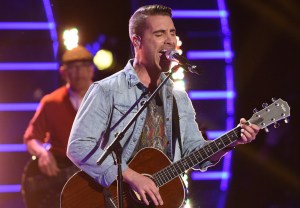 Quick! You have one song to sum up the very soul of who you are as a human being! To quote Dennis Hopper in Speed: “What do you do? What do you do?“

If you’re a member of American Idol‘s Season 14 Top 4 (or is it 5?), you stake everything you are on… Rascal Flatts’ “What Hurts the Most” (say what now?!). A Justin Bieber track (oh hell naw!). Or the “baby lock them doors” jam that defined Scotty McCreery’s Season 10 run (#IDontUnderstandTheQuestionAndIWontRespondToIt).

These troubling choices raise some important questions: Are executive producer Per Blankens and His Ilk (a hot name for a Swedish new-wave band) forcing the remaining contestants to choose from song lists with fewer selections than Kim Kardashian has IQ points? Or have we reached the point in the evolution of The House That Has Never Acknowledged Season 4 Semifinalist Aloha Mi’Sho’s White-Hot Jams where surprise has gone the way of the Dodo bird?

It’s hard to say — seeing how Idol continues to deny us any access to what’s happening behind the curtain. (And yet there’s time for Martina McBride to muddle her way through “Over the Rainbow”?) I’ll just say that this week, I really missed Joey Cook and Quentin Alexander (AKA Those Who Just Missed the Cut for the Idol Tour I’m Not Sure I Want to Attend) and their unique sense of artistry.

Instead, we got Nick Fradiani making a major play for front-runner status with solid, straightforward covers of songs you’d expect him to sing; Jax solidifying a Top 3 slot by using an ill-timed spring cold to bring added emotion to her music; Rayvon Owen confirming the long-held suspicion… that he’s not just teflon, but also quite human; and Clark Beckham stamping his feet like a toddler in the toy aisle and insisting his artistic vision trumps the advice of experienced industry professionals. (I’d have applauded his decision, if, in fact, dude had sounded better on either one of his head-scratching numbers.)

Oh, it needs to be said Tyanna Jones was eliminated rather clumsily in the middle of the episode — she was possibly in the bottom 2 with Rayvon? — then asked to perform an uptempo Beyoncé ditty (to disastrous effect). Surely there has to be a better way to structure this one-night-per-week edition of Idol, no?

But before I go ahead and start flapping my gums again about additional underpublicized Idol alums — do check out music from Alexis Grace and Jason Castro, though! — let me get to my letter grades for this week’s performances:

Songs From the Judges’ Hometowns
Clark Beckham – Stevie Wonder’s “Living for the City” — Grade: C+ | Like a short person reaching for those rarely used champagne glasses on the highest cabinet shelf — I know of what I speak! — the challenging high notes of Clark’s opening number felt just a shade out of reach… representing a surprising second week of struggle for the fella widely considered to be the Season 14 front-runner. Even the Rev. Beckham Howl (TM pending) on the “la-da-da” breakdown failed to captivate — filling me with the sinking feeling that Clark was subconsciously passing his showcase showdown (confetti shower, major-label deal) to Jax and/or Nick.

Jax – Alicia Keys’ “Empire State of Mind (Part II) Broken Down” — Grade: A- | There was definite strain in Jax’s vocals tonight — under grilling from the judges, she admitted she wasn’t feeling 100% — but the breaks in her voice and raggedy quality of her tone perfectly fit the hardscrabble vibe of Alicia Keys’ glorious ode to a city of strivers and dreamers. OK, the ending was a little stilted — like J.Lo (MVP of tonight’s panel) I wondered if Jax knew whether or not she still had notes left to sing — but despite the glitch, Season 14’s sole remaining female reminded us of her delectably deliberate phrasing and inherent ability to translate her personal emotion into something downright universal.

Nick Fradiani – Matchbox 20’s “Bright Lights” — Grade: A- | OK, I surrender! Nick is not going to sing Tracy Chapman’s “Fast Car” (even though he reeeeeally should) or any other out-of-left-field-but-still-perfect-for-him ditty. Surprise is not a garment hanging in his closet, just waiting to make an appearance at a critical juncture in the competition. That nitpick aside, however, “Bright Lights” proved to be the most potent, in-tune vocal of the evening. I cringed a little when J.Lo squeaked “peeeeeeaking!” at the end of his number, but that doesn’t mean she wasn’t right. Nick’s confidence grows every week he’s not a member of the Bottom 2, and his years of gigging at small clubs and bars have given him the type of enviable endurance one needs to survive month after month of the grueling Idol schedule. Nick could’ve focused a little harder on his enunciation in certain parts of the verse, but that “for God’s sake turn around” plea mid-song was undeniably stirring.

Tyanna Jones – Beyoncé’s “Run the World (Girls)” — Grade: I…’m not going there (she was crying, after all) | “If you’re gonna do one last performance, that’s the way to do it!” declared Keith, who was either A. Being really, really kind about a performance that was maybe only 20% in tune, or B. Simply not paying attention because what did it matter what he had to say at this point, right? Either way, this was an inauspicious end to Tyanna’s Idol journey and a less-than-stellar kickoff to her post-Idol career.

Rayvon Owen – Lady Antebellum’s “Need You Now” — Grade: B | I know, I know… J.Lo instructing Rayvon on the finer points of acting might have been a little cringe-inducing for those who’ve only seen that “I love your mother’s cookies” mess and not the Oscar-nominated Out of Sight. But “She Who Hails From The Block, USA” had a point about Rayvon’s very pretty but slightly overwrought Lady Antebellum cover. You can hit all the notes in the world, but if there’s not true, pulsing intent behind them, then so what? Rayvon brought palpable loneliness to the verses tonight, but he overbaked the refrain, trying so hard to convince us of his need for a late-night hookup with an old flame that the whole thing just flickered and extinguished right before our eyes.

“Gravy” Songs/Songs Representing the Contestants’ Souls
Clark Beckham – Josh Turner’s “Your Man” — Grade: C+ | Clark’s pre-performance package was almost as awkward as that time in Season 13 when Harry Connick Jr. hoisted a teenage girl on his shoulders. As Big Machine label chief Scott Borchetta and Rascal Flatts’ Jay DeMarcus questioned his decision to flip a country song into a slow and (trying to be) sexy blues jam and wondered if it might hurt him with voters, Clark shot back, “If this loses me the competition, then I don’t want to win it.” At which point, Mr. Borchetta tossed in a remark about the kid being on a “fast track to the Holiday Inn.” (Ouch!) But here’s the thing: While I’ve got no beef whatsoever with Clark sticking up for his artistic vision, I also think it’s a little early in his career for him to close his ears to expert advice. Clark’s twist on “Your Man” was groove-less, sexless and especially strained at the top of his register — a misstep in both arrangement and vocal execution — and ignoring the warning signs of such a collapse seemed less about integrity and more about obstinance.

Jax – Christina Perri’s “Human” — Grade: B+ | Jax’s vocal was far from perfect, it’s true — as her illness definitely caused some hinkyness on the rangey ballad’s biggest notes. But at the same time, the broken quality of Jax’s under-the-weather voice fit “Human” as flawlessly as Ryan Seacrest’s suits… bringing a palpable ache to a song about relationship insecurities. Was the dramatic “knee drop/swallowed by dry ice” move a bit much? Perhaps. But then again, maybe Jax collapsed to the ground so her ears could avoid a direct assault from a backup singer who began howling over the final chorus like an alley cat with a paw trapped under an anvil. Jax’s ability to remain tuneful in the path of such hurricane-like caterwauling was pretty impressive — and ought to make her a lock for the Top 3.

Rayvon Owen – Justin Bieber’s “Believe” — Grade: A- | I know Jim Morrison has as much to do with Rayvon as the contents of a pickle jar have to do with the Kentucky Derby (it’s late — just go with me on that analogy), but I need to paraphrase the Doors frontman by celebrating the fact that the perpetually-in-danger cutie finally broke on through to the other side tonight. Before: Technical proficiency punctuated by flowery ad-libs. After: Genuine emotional release. It took Rayvon dedicating the “thanks for standing in my corner” lyrics to his mother (who was in the audience) to unequivocally make us feel what he was feeling. But once it happened, oh did we ever. Sure, the final 20 seconds or so got a little mangled (pitch/control-wise) thanks to a percolating ugly-cry (or at least that’s what Rayvon appeared to be fighting), but so what? We finally got a peek under Rayvon’s surface – and what we saw was heart.

Nick Fradiani – Rascal Flatts’s “What Hurts The Most” — Grade: B | While this definitely felt more like a matter of, “Oh, one of the Rascal Flatts dudes is mentoring — I’d better pick his song!” than a genuine display of the contents of Nick’s soul, he ultimately delivered a perfectly fine vocal — and one that, if I’m being honest, I don’t have much else to say about. (So actually, I’m gonna end there, OK?)

And as far as next week goes…

On that note, I turn it over to you! What did you think of Top 4/5 performance night? Who were your faves? Who’s at risk? Take our poll below, then sound off in the comments!