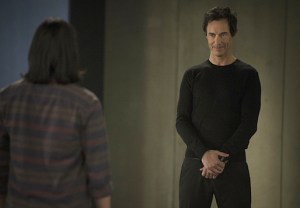 This week on The CW’s The Flash, much knowledge was dropped (in some cases, finally), as Barry & Co. got a glimpse into the future and the scarlet speedster sparked something in Iris. But in the end, did the S.T.A.R. Labs team’s trap work, or have a “reverse” effect?

Well, wasn’t that a ton of fun? Episodes like this I privately enjoy watching in advance at the office, because of the spontaneous bursts of laughter I unleash on those within earshot, such as when Cisco got a gander at Gideon’s next-next-next-next-gen OS and waved a white flag. Or, his miming of the Temple of Doom heart rip. A well-placed “Mazel tov?” is also always aces.

The reading of the 2024 news story was extremely entertaining (though the albeit blurry byline glimpsed in the pilot clearly wasn’t a hyphenated last name. More on Iris in a bit). A freeze-framing reveals all the superfriends who were on hand for the epic clash. Also, Gideon clued us into the big promotion that awaits Barry at the CCPD.

‎Barry’s “very bad idea” to coax a confession from Wells was compelling to watch play out, especially as Cisco in his dream state disclosed drips and drabs of observations (“Thawne??”), or effused over “finding” the favorite shirt he thought he lost in the wash. Does anyone recall if Wells’ confrontational dialogue to Cisco this week was precisely the same as first time around? You wondered where it all was going — pretty much knowing there had to be a curve ball — and then “Wells” passed through the speedster barrier Cisco had concocted. Don’t know about you, but I for those few seconds assumed he “vibed” his way through, or something. Then when he took a bullet and died pre-confession, I assumed we were heading for a scenario where Barry travels back in time to re-reset the trap.

But then we learned it wasn’t Wells at all. That he subbed in last week’s shapeshifter (though how the imposter knew what to say, hmmm). Still, wildly fun stuff — and ominous too, as Wells warned the gang he’ll always be a step ahead, and that he will kill Barry. Someday.

And then there’s the Iris of it all. 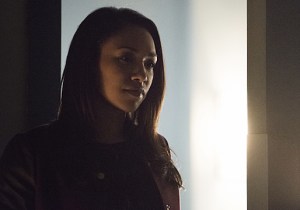 Lo and behold, her investigation of The Flash and his fellow freaks led her to deduce that the fun all started the night of the S.T.A.R. Labs explosion — though Barry of course wasn’t imbued with any powers, heh. I couldn’t figure out why they were playing the “Eddie wants to propose” card amidst all this good drama, but then it became clear — for one, we learned the real reason Joe wouldn’t bless his colleague’s wish (awww), plus it set up the penultimate scene, where Reverse-Flash crashed the question-popping and whisked away his “kinsurance,” knowing that Iris ultimately marries (and hyphenates her name with) Barry. Gotta keep that timeline intact.

Now, how about Candice Patton’s wonderful bedside scene in the flashback hospital? (Especially overcoming as it did the Saving Hope-like lens flares.) Between that, her journalistic findings and her realization of The Flash’s identity, big night/steps for her.

What did you think of the episode “The Trap”? I’m Zod-awful at speculating, but is Eobard Eddie’s kid, perhaps raised to exact vengeance on the guy who stole Iris away?