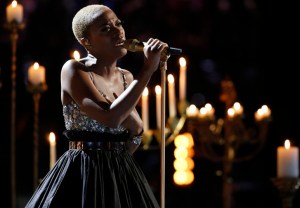 I wasn’t planning on watching the Mayweather-Pacquiao boxing match this weekend — I’m more of a Kentucky Derby kinda guy, to be honest — but I can’t imagine it being much bloodier than Top 8 Performance Night on The Voice.

Look, there’s no denying that Season 8 of NBC’s reality singing competition is as jam-packed with talent as Kim Kardashian’s pencil skirts are heaving with badonkadonk. It’s just that, with two more performers headed for a dinner date at The Rancor‘s basement apartment on Tuesday night, it seemed like nearly everyone was swinging hickory bats at melodies requiring butterfly-wing delicacy.

Those happy little bluebirds flying over the rainbow? They got turned into skeet-shooting targets taken down by grenade launchers. The Thunderdome of Mad Max fame? Turned into the world’s largest sandbox before our very eyes!

The overwrought-ness of this week’s performances made it all the more appealing whenever an artist went quiet, stuck to the melody, chose restraint over bombast. Take Joshua Davis, for example. His choice of Sting’s most snooze-inducing song turned out to be an air-conditioned lounge in an otherwise steaming prison of holleration.

OK, maybe I’m exaggerating just a bit. I mean, Kimberly Nichole collapsed in a heap of fog and taffeta and made “theatre!” a 10-syallable word, and I loved it. So maybe, to paraphrase Kenny Rogers, it’s just a matter of knowing when to hold ’em, and knowing when to belt ’em?

Either way, let’s get to my letter grades for this week’s performances:

Team Blake: Hannah Kirby — Tina Turner’s “We Don’t Need Another Hero” — Grade: C- | I’m not sure how Blake could declare that Hannah’s vocal was perfect, given her struggles with the song’s lower notes and her utterly lifeless approach to the verses — but I suppose there’s a reason he’s the only coach with all three team members still in the mix. Dude could sell lima beans to toddlers! And hey, at least we had Xtina keeping it real and not-so-subtly throwing shade at the awkward-dancing hippie chick by praising Hannah’s backup singers (“Those kids were awesome!”) moreso than the headliner herself.

Team Adam: Joshua Davis — Sting’s “Fields of Gold” — Grade: B | No one is ever going to accuse Joshua of being Season 8’s most exciting participant — but not every occasion calls for a glass of champagne or a habanero salsa. Sometimes, a glass of warm milk is exactly what the doctor ordered — and that’s what Joshua’s soothing, unadorned vocal brought to mind sitting atop a sparse, piano-driven arrangement. There’s no chance the soft-spoken dad is gonna take home the Season 8 crown without exhibiting some kind of heretofore unseen grit and fire, but methinks he did enough this week to crack the Top 6.

Team Xtina: Kimberly Nichole — Radiohead’s “Creep” — Grade: A- | When Xtina announced that Kimberly was covering “Creep” with some jazzy inflections, my stomach sank: Was nobody going to mention American Idol standout Haley Reinhart’s delectable new “Creep” cover with Postmodern Jukebox, the one that’s sitting at No. 2 on the iTunes jazz charts? No shock, the hat tip to a competing reality show didn’t happen on air — though Kimberly later tweeted her version was inspired by Haley’s. Still, while the arrangements had some similarities — despite a slightly creepier music-box tilt to Kimberly’s piano accompaniment, and a sexier horn vibe to Haley/PMJ’s — the vocal approaches didn’t overlap all that much. Kimberly’s approach felt less slinky, didn’t betray as much longing as Haley’s; the Voice diva instead amped up the theatricality of the melody, her tight growl crumbling with loneliness on the verses, then exploding with a howl as she went into a full backbend on the word “ruuuuunnnnn.” And now that she’s learned the art of gratitude-face during judges’ comments, Kimberly’s more of a threat to make the finale than ever before — and deservedly so.

Team Blake: Meghan Linsey — The Beatles’s “Something” — Grade: C | Meghan declared she was setting out to show her vulnerable side on George Harrison’s most famous ditty, but I’m starting to fear the onetime Nashville chart-topper simply doesn’t know the meaning of restraint. Girlfriend was already cranked up to “9” on the opening verse – losing the plaintive, romantic feeling of the lyrics in the process — and then spent the final two-thirds of the performance giving us the full Edvard Munch (which is to say she was screaming). It’s all well and good to show you’ve got vocal horsepower, but that’s a very different thing from trampling a beloved ditty with a full team of Clydesdales.

Team Xtina: India Carney — “Over the Rainbow” (from The Wizard of Oz) — Grade: B- | On paper, this classic movie ballad seemed like a perfect fit for India’s undeniable talents — and she started off promisingly enough with an intro that was nearly a cappella. Alas, though, in her efforts to “make it her own,” India wound up weighing down “Over the Rainbow” with unnecessary runs and unwelcome tweaks to the melody. There were flashes of beauty throughout — and India’s clear joy in tackling one of her favorite tunes was a nice little bonus — but I fear she’s run out of time to deliver enough of a “Voice Moment” to keep her out of the Bottom 3.

Team Pharrell: Sawyer Fredericks — Lynyrd Skynyrd’s “Simple Man” — Grade: B+ | I’d be lying if I said Sawyer didn’t struggle a little to cut through the Voice band’s aggressive arrangement — which resulted in a slightly strained quality to his vocals on the final refrain. That said, as guest mentor Gwen Stefani noted, there’s something riveting about the kid’s emotional honesty — and the wise, weathered way he brings a lyric to life. I’m not sure Pharrell is doing Sawyer any favors by perpetually pushing him in a classic-rock vein — coaches need to not only think about what will score votes, but also what will help propel a singer’s post-Voice career — but either way, his spot in the finale is as sure a thing at this point as Blake adding “special ingredients” to his Starbucks cup.

Team Blake: Corey Kent White — Bad English’s “When I See You Smile” — Grade: B- | I understand why some viewers are drawn to Corey’s earnest, gravel-tinged delivery — or why they might even root for him based on the way Blake’s forever treating him like the Jan to Meghan’s Marcia and Hannah’s Cindy. Still, this doesn’t wash away the fact that the ends of many of Corey’s phrases have all the strength of a freshly hatched hummingbird — I swear, at least two or three times tonight the kid opened his mouth, but no sound came out — nor that he’s still noticeably struggling with pitch this deep into the competition. Granted, this was a massive improvement over Corey’s debacle last week, but perhaps not improvement enough to make him Top 6-worthy?

Team Pharrell: Koryn Hawthorne — Alicia Keys’s “Girl on Fire” — Grade: A | Has anyone ever seen a diamond get polished? I imagine it’s a pretty exciting process — with many of the same joys one might experience watching Koryn rise to possible stardom on The Voice. I loved how it was her idea to slow down the opening half of her Alicia Keys jam — the better to build tension and create an even bigger impact when she finally let loose on the chorus — and what it says about her investment in the process.  You could practically see Koryn trembling with anticipation and pride as she spun the tale of a girl claiming her own greatness and forging her own destiny — and those raw emotions crept into every word of the lyric. She’s got a seriously unique tone, likability oozing from every pore, and, as Xtina noted, the ability to bloom under pressure. If she can continue thinking front-runners like Sawyer and Kimberly don’t have a leg up on her, Koryn could sneak her way right into the finale.

OK, your turn. What did you think of The Voice‘s Top 8 performance night? Who were your faves? Who’s in trouble? Take our poll below, then hit the comments to expand on your thoughts! 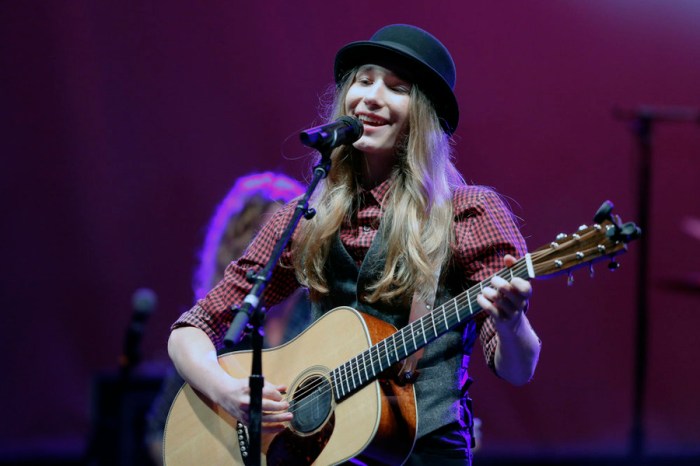