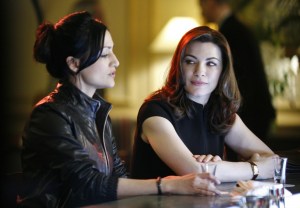 Good Wife fans feeling underwhelmed by Kalinda’s abrupt departure in Sunday’s episode will be heartened to learn that Archie Panjabi‘s short-skirted, leather-booted PI is poised to make the mother of all encores.

TVLine has learned that Panjabi — whose exit from the series was announced back in October — figures prominently in the CBS drama’s May 10 season finale. In fact, sources confirm that the episode, titled appropriately “Old Issues,” is poised to feature that scene.

Yep, barring any last-minute tweaks to the episode, “Kalicia” ‘shippers will get the face-to-face moment between Panjabi and Julianna Margulies for which they’ve been waiting nearly three years. And I hear it’ll be a crowd-pleaser — satisfying, heartbreaking, funny, etc.

And just as important as the dialogue exchanged between the characters is the setting of the momentous scene.

Back in March, Good Wife co-creator Robert King told TVLine that the decision to keep the two characters apart “is very much intentional to raise expectations,” adding that viewers should, “stay tuned.”