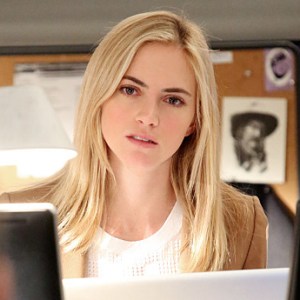 Emily Wickersham opens our interview with a playful, clandestine whisper: “Jake and Gibbs are having a secret relationship.”

Jake (played by guest star Jamie Bamber), of course, is the husband of Wickersham’s NCIS character, probationary Special Agent Ellie Bishop. Gibbs, her boss. And Wickersham is teasing the “light runner,” as they say, in this Tuesday’s episode (CBS, 8/7c), which launches a three-part season-ending salvo.

Regarding the aforementioned bromance of sorts, which comes to light this week, the actress says, “I don’t know if Ellie knows the extent of it, but the team is very surprised, because it’s an unlikely duo.” And while mum on the exact nature of the connection, she dismisses our suggestion that they’re meeting up for mini-golf and brewskis. “I think they’re talking about more important things that no one is allowed to know about,” she teases. “It’s all very interesting….”

That mini-mystery, fascinating DiNozzo and the others as it does, is perhaps a rare bit of lightness amidst Season 12’s intense final three hours. Here, Wickersham previews the high-stakes case the NCIS team is about to tackle, the casualty it will claim, and more.

TVLINE | This week’s episode, “Troll,” kicks off a big season-ending storyline….
Yeah. Ned Dorneget — played by the wonderful Matt Jones, who I worked with for the first time — is assisting the team when an ensign who worked in Naval Intelligence is murdered. We find out that the murder is connected to an international terrorist group that is recruiting children through the Internet. So basically, through the last three episodes, we’re trying to figure out what the hell is going on. 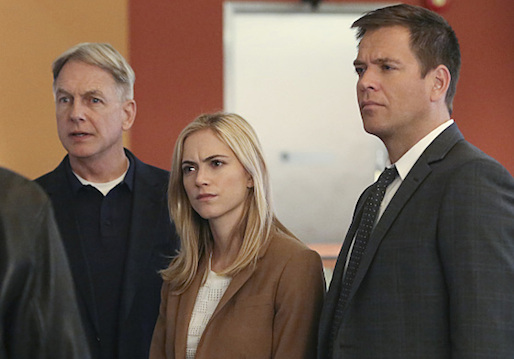 TVLINE | Is there ultimately some sort of terrorist event NCIS is scrambling to thwart?
Oh yeah, a big event that I obviously can’t talk about. But these episodes bring up important things about the Internet and how accessible it is to everyone, children in particular. The Internet is a wonderful place but it has the potential to be a very scary place as well. You don’t know who your kids are talking to….

TVLINE | No, one of my 12-year-olds has an Instagram account with 17,000 followers, so I make sure to keep an eye on things.
It’s crazy, yeah. I just feel like you never know who’s behind the accounts or whatever. It’s scary. It’s scary.

TVLINE | What can you reveal about the “significant loss” that [showrunner] Gary Glasberg told me about?
Ohh, I know…. The significant loss is someone who everyone loves, I think, and it will be a very sad, shocking thing — but, at the same time, it becomes a motivator for the team, to kind of figure things out….

TVLINE | On the plus side, you have Mimi Rogers guest-starring in the final two episodes (titled “The Lost Boys” and “Neverland”).
Mimi Rogers is frickin’ awesome. She plays a very strong character, a CIA officer, and she has been wonderful to work with. She’s super-cool.

TVLINE | A couple of weeks ago, they sent Bishop to Afghanistan. Did you enjoy seeing her pushed her beyond her comfort zone?
Yes! I think Bishop felt very nervous about it, like she was outside of her comfort zone — especially given her background and training. She’s been out in the field, but this was big, big, big for her. 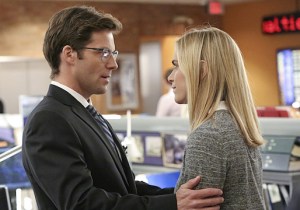 TVLINE | Is there anything else on your “wish list” for the character? Maybe fire an automatic weapon?
Weapons scare me in general; I’m just getting used to the one we’re using! But next season, I really want to meet her family. I have my own thoughts about where Bishop came from, so…. on the less action-y side, that’s something I’d be excited about.

TVLINE | Lastly, tease the season finale for us.
Oh, gosh…. Well, we’re still investigating this terrorist group that’s recruiting children, and at that point we know who dies, and it’s a big loss for the team. There are great action pieces, Mimi Rogers is in it….

TVLINE | Is there a cliffhanger per se?
I mean, the very last scene…. [Pauses, catches herself] Actually, I don’t want to divulge too much. It’s just an emotional episode for the team. The loss is a very motivating thing, and we’ll see what the team does with that.