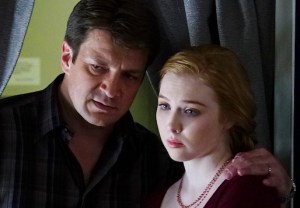 First, some disclosure: I love pretty much any thriller set on a plane. Passenger 57, Flightplan, Airport, Executive Decision, Air Force One… Die Hard 2, by extension.

So for that reason, but also others, I kinda loved this hour of Castle, and felt it was easily the best episode since 3XK’s return.

For one, the episode did right by Rick, putting him in command of this investigation into an air marshal’s mid-flight murder. He was smart and a bit more serious than usual,with  no conspiracy theories to dampen the drama. He came off as a savvy writer of mysteries, but also a protective dad, frequently minding Alexis’ safety as a passenger on this unusual flight.

But the people around him also had their moments — like Alexis, working with Lanie via Skype to ID the cause of death and dig up the first big clue, or “taking down” the gun-waving killer at the end. Or cabin crew member Farrah, who had the idea on how to see which passengers were left-handed.

Working the case from the ground, Beckett supported Castle in more ways than one, at one pointing reassuring him that he knows how to interrogate someone (though maybe he should not have revealed his reticence to the suspect tied up within earshot). We also saw Kate fret throughout the ordeal, a huge sigh of relief leaving her body in the closing scene, when she had confirmation his flight had touched down in London safely. What was going through her mind in that moment? Because they made it seem specific….

The episode only lost points, in my opinion, for the killer reveal and, more specifically, her shaky motive. Cabin crew member Debbie (NCIS alum Paula Newsome) had lost her pension, so she decided to rob an auction house courier, then begrudgingly whacked the air marshal/bodyguard when he got wise to the heist. Really? That said, thinking (hoping?) they would not make the kindly “mother hen” crew member the killer, I’m glad that my top suspect — hey, let’s have Rick conspicuously make note of the sleeping guy! — turned out to not be the killer.

And having not been on a trans-Atlantic flight recently, I’ll assume that the wi-fi, in-flight cell phone calls, emailing and video chatting are that reliable. Though how were Rick’s video chats and speaker phone convos not tipping off nearby passengers?

What did you think of the season’s antepenultimate episode, “In Plane Sight”?