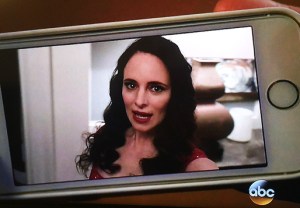 Despite her deserved reputation as one of the Hamptons’ preeminent phoenixes, Victoria Grayson did not rise from the ashes on Sunday’s Revenge.

She did, however, manage to raise some serious hell — sent directly from the source, no doubt — via a highly incriminating (and highly faked) break-in scene at Chez Victoria. “This wasn’t a suicide at all,” remarked the oh-so-astute Louise. “This was murder!” Dun, dun, dun…

Naturally, both members of Team Clarke were called in for questioning, during which a whole mess of secrets finally spilled out: Amanda learned that David has cancer, Jack found out he “won” the battle for Amanda and she told Ben that Mason “Crazy Capote” Treadwell is still alive. He is, after all, the only person able to corroborate her airport alibi.

But the biggest secret, unfortunately for Mandy, was saved for last: Victoria and Mason were working together to frame her for murder, the details of which were revealed in a posthumous message from the Queen of the Hamptons, herself. And right on cue, Detective Ben showed up with cuffs — and not the good kind.

ANTISOCIAL WORK | Despite the world literally exploding around him, Nolan actually managed to forge a healthy, romantic, stress-free relationship with Tony — which meant it was only a matter of time before it all came crashing down. Frankly, I’m surprised Tony merely broke up with Nolan upon learning that he’ll soon be adopting a child; I figured the unrealistically hot social worker would end up getting the Aiden Mathis Special for sure. (So there’s still hope!)

‘GOODBYE, AMANDA’ | At the top of the hour, Jack — and the viewers — were basking in the glow of the former Hamptonite’s new, clothing-optional life in Los Angeles. But it wasn’t long before, just as Mama Grayson feared, Jack’s connection to Amanda lured him unwittingly back to the scene of the (alleged) crime. Too bad he wasted his first interaction with her, serving up a cold glass of “Goodbye, Amanda,” because by the time he arrived at her house to make things right, she was already being hauled off.

Revenge fans, any idea how Amanda is going to weasel her way out of this one? And what do you hope to see in the season/series’ final two episodes? Drop a comment with your thoughts below.