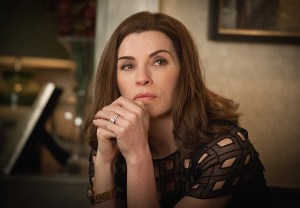 Like an exquisite meal sitting on a wobbly restaurant table, this week’s installment of The Good Wife had its delicious moments — marred by the intermittent/aggravating vibe that somebody at the top of the food chain really ought to be paying a little more attention to detail.

I mean, do we honestly believe Chicago drug kingpin Lemond Bishop would leave all his precious secrets on an unguarded computer in his home office? Or that Alicia and Diane would ignore their own gut instincts and professional experience — and put their faith in He Who Could Double as a Sneering, D.C. Comics Villain (I refer, of course, to David Lee)? Or (perhaps most eyebrow-raising of all), that Kalinda Sharma would choose to take that Midnight Train to Georgia (or wherever), to a simpler place in time, all because a pawn on her chessboard momentarily threatened the queen?

Don’t get me wrong: I got some solid emotional release watching Alicia break down after learning her former partner in martini-slugging was (possibly?) out of her life for good. And it’s also nice to see that — in light of her stepping down from the State’s Attorney post under a cloud of scandal — our titular heroine can’t just click the heels of her ruby slippers and go back home to a standard operating (albeit fascinating) case-of-the-week format. I just think the always elegant Robert and Michelle King — showrunners I’d follow even if they sent Alicia on a quest for the Rambaldi device — hit a few clumsy notes in “The Deconstruction” that I’m worried won’t be addressed in the final two hours of Season 6.

But since it’s quite possible I’m the only Picky McGrumperson who’s started an Evernote file in his iPhone labeled “Nagging Good Wife Questions,” let me get to the business of giving you a recap the third-to-last installment before the show’s cruel summer break.

GONE GIRL | Kalinda – learning Cary wants to testify instead of her — cuts him off at the pass and strikes an agreement with Geneva: She won’t take the stand, but in the next day or two, she’ll come up with some other evidence to put Bishop behind bars. Shortly thereafter, we see the boot-loving investigator get in a car with Bishop’s No. 2, Dexter Roja, and quiz him about whether he might be turning against their soon-to-retire boss. Her line of inquiry seems imprudent at best and insane at worst, but it turns out she’s merely dropped by to steal a flash drive from the unsuspecting stooge. After bringing Bishop’s son home from school, she sends him upstairs and sneaks into the study, then uses said drive (labeled “D.R.’s Jams #2”) to upload all of Bishop’s files. (Again, do we really think a drug dealer with this much clout would leave himself so exposed? And is this pilfered evidence admissible anyway? Haven’t we hear the phrase “fruit of the poisoned tree” on this show too many times before?)

When Bishop comes home and gets the error message “the disk was not ejected properly,” it looks like Kalinda has made an amateur mistake — until we realize everything traces back to Roja’s drive. Bishop gets arrested – again, his “Call my lawyer, and tell Dexter he’s dead” seems like an implausible thing to utter in front of members of the Chicago P.D. — but Kalinda’s plan hits a snag. Cary, waiting in Kalinda’s apartment, tells Roja he’s the one who put Bishop behind bars… but in the midst of their chat, Roja remembers Kalinda was the one who had access to the drive with his favorite playlists. Uh-oh.

There’s a great scene where Cary and Kalinda discuss how things are going down —and it’s telling she keeps her back to him almost the entire time. The wheels are turning in her head — and she realizes she’s got to flee the scene or wind up another missing person/dead body in Bishop’s business plan. She finally turns and kisses Cary gently — and it feels deeper than a temporary goodbye.

Kalinda then goes to Alicia’s apartment with a note — but it’s only Grace who’s home. The Lady Sharma looks at old photos on Alicia’s mantle, gets jarred by her erstwhile lover Peter’s face, gets misty eyed recalling snapping an old pic of Alicia holding up a makeshift [and Florrick] banner at the end of the Lockhart Gardner sign. But she doesn’t have time to wait for her old friend.

Later, on the phone with Diane, she offers a platitude — “Life’s too short to be mad” — to help repair her boss’s rift with Alicia, and it’s decidedly un-Kalinda. Diane seems a little startled, but she’s got so much on her plate, you can see her compartmentalize and dismiss it.

Sure enough, Cary soon learns his lady love’s phone has been disconnected, and when he goes back to her place, he finds she’s cleared out all of her possessions — even hammered a hole in the plaster to grab her secret stash (cash? guns? passports? probably all of the above).

It’s Alicia, though, wearing a hoodie and jeans (!!!), who’s ultimately most devastated by whatever Kalinda has planned. She finds her old pal’s note on the mantle, reads it, then discards it almost with disdain. Seconds later, though, she’s doubled over weeping, clearly anguished. Can someone promise me we’ll know what was in the letter in the first minutes of next week’s episode? OK, thanks. If this is really Kalinda’s last episode — I’m kinda stoked she left as she lived, enigmatic, shadow-like, always willing to do what needs to be done for her well-being and the benefit of those around her. She’s not the kind of chick who sticks around and takes a bullet, right? But nevertheless, WE NEED TO KNOW WHAT IS IN THE NOTE, ROBERT AND MICHELLE KING! 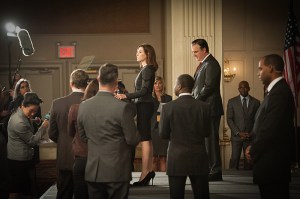 WHOSE FIRM IS THIS ANYWAY? | The hour opens with Alicia’s press conference — where she gives up the SA seat while reiterating “neither I nor anyone associated with my campaign was responsible” for voter fraud. Her voice is breaking by the end, though, along with her heart. “What do I do now?” she asks Peter backstage, clearly reeling for her next move and (despite their sometimes vitriol) understanding this is a man in her life who knows how to move past scandal. (Speaking of which, where’s Eli?)

All seems well when Alicia meets with Cary, Diane and David — and they cheerily tell her they want her to come back as a name partner. “This is home, Alicia,” beams Diane. “Welcome home.”

…Or is it? Alicia gets a call from a client named Mr. Gallagher — and he informs her Diane is trying to retain him for the firm, that she has no intention of bring Alicia back into the fold. Her cursory look into matter has her and Finn thinking she’s being double-crossed, so she begins phoning her clients and telling them she’s going off on her own. David Lee is the maestro in the orchestra of bad vibes and betrayal — though even he thinks he’s on the side of right (even though his poaching phone calls are totally, David Lee-ian despicable). It all ends with Diane’s formidable, “get out of here, Alicia. Get out of here now”

Turns out it’s Kalinda who irons things out — calling Alicia (again, the ladies speak via phone, not in person), and sets Alicia’s time frame straight. Diane called Gallagher before she knew Alicia wanted back in at the firm. “You ned to call Diane right now,” she urges.

Thankfully, Alicia and Diane’s face-to-face detente goes well — but there’s a catch neither of ’em see coming. Turns out Diane’s new billionaire Republican client R.D. (Oliver Platt) will part ways with the firm if Alicia rejoins. Whether she was innocent of voter fraud or not, he argues, she’s going to always be viewed as another George Ryan or Rod Blagojevich — and his reputation can’t afford that kind of association.

And so we’re left with Alicia back in the dining room seeking advice from Peter. “Rest, read a book, recharge the batteries,” he says, warmly, then suggests instead that his estranged wife actually write a book. A quiet author’s life a woman who absolutely thrives when she’s up against the ropes, spitting blood into a cup? I sure as heck hope not — especially because a Season 7 with Alicia channeling her inner Carrie Bradshaw is damn hard to envision.

HEY, IT’S MARLENE FROM THE BIG C! | R.D. enlists Diane and Cary — and bookend conservative attorneys — to look for a test case involving minimum mandatory sentencing for drug offenses. Diane finds a noble cause in a grandmother who accidentally mailed 26 MDNA tablets for her addict grandson — and now faces 6-30 years hard time as a result. We learn the defendant (the always terrific Phyllis Somerville) would be better off (from a legal standpoint) if she were an addict, and while scenes of Christine Barasnski and Linda Lavin (as Somerville’s pre-sentence officer) delight — two powerhouse actresses in a fascinating culture clash/power struggle — this is more of a distracting amusement from the serious “what does this mean for the series?” A and B arcs discussed above. (Louise, we’re pleased to learn though, gets off with six months probation. Whew.)

On that note, it’s your turn. What did you think of Kalinda’s exit? Will we see more of her in the season’s final two episodes — or was this her last call? Sound off in the comments!