Live! From the basement ballroom of the Washington Hilton! It’s… Saturday night’s White House Correspondents’ Dinner, at which President Barack Obama and Saturday Night Live cast member Cecily Strong each fired shots at both sides of the aisle.

Was Cecily a Strong host of the annual gathering of press, politicos and celebs? Did POTUS hold his own, with his opening remarks? At the risk of a thumb cramp, I scrolled through the cable guide until I found C-SPAN and watched for you, singling out these zingers.

“[Previous WHCD host] Joel McHale proved that speaking at this dinner is an amazing opportunity that can take you from starring on a show on NBC all the way to starring on that same show on Yahoo.”

“Since I’m only a comedian, I’m not going try to tell you politicians how to do politics. That’d be like you guys trying to tell me what to do with my body. Can you imagine?”

“It’s great to be here at the Washington Hilton… is something a prostitute might say to a congressman.”

“I don’t want to be too hard on [the Secret Service], because they’re the only law enforcement agency in the country that will get in trouble if a black man gets shot.”

“[Fox News] is all hot blonde ladies and old dudes. Every show looks like a party scene from Weekend at Bernie’s.“

“Even SNL got criticized for making fun of ISIS. If anyone is guilty of taking ISIS too lightly it’s… [nods head in Obama’s direction]… him.”

“What can I say about Brian Williams…. Nothing, because I work for NBC.”

“This year a representative from Hobby Lobby said they didn’t want to pay for employees’ health care if it covered things like contraceptives — which is weird because all i asked him is, ‘What aisle is the yarn in?'”

[To the assembled press] “Raise your right hand and repeat after me: ‘I solemnly swear… to not talk about Hillary [Clinton]’s appearance… because that is not journalism.'” [Cue much applause]

[Then, regarding Clinton’s White House bid] “I would never blindly endorse a candidate I don’t play on SNL.” 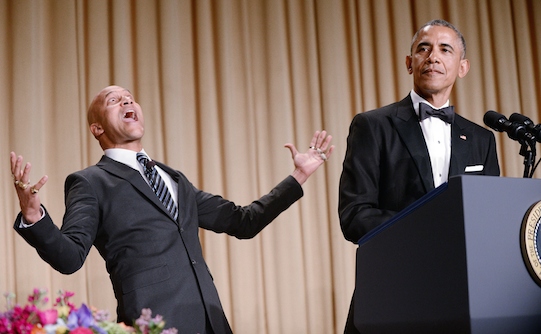 “After the midterm elections, my advisers asked me if I have a bucket list. And I said, ‘Well, I have something that rhymes with bucket list.'”

“Today, thanks to Obamacare, you don’t have to worry about losing your insurance if you lose your job. You’re welcome, Senate Democrats.”

“[Representative] Michelle Bachmann actually predicted that I would bring about the biblical End of Days. Now that’s a legacy…. Lincoln, Washington, they didn’t do that.”

“[Vice President Joe Biden and I] have gotten so close, in some places in Indiana they won’t serve us pizza anymore.”

[Regarding the black-ish cast in attendance] “I have to give ABC fair warning — being black-ish only makes you popular for so long. Trust me.”

How do you think Cecily Strong did as this year’s WHCD host?