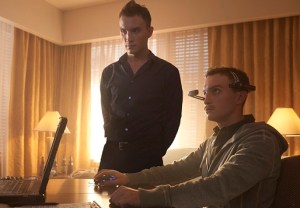 Orphan Black fans, I have a confession to make: I liked this week’s episode much more than the season premiere, which I found unwieldy to the point where I got lost in the plot.

This week’s episode was calmer and more rooted in character than conspiracy, although we still got plenty of Project Castor developments.

So let’s get to the action, which begins between the sheets as Rudy brings a random woman back to his hotel room. As they’re in the throes of passion, Seth joins in, much to the woman’s horror once she opens her eyes and sees them both hovering over her. (Props to co-creator/director John Fawcett for the magnificently creepy shot of four hands roaming over the woman’s body.)

The next morning, Paul shows up to administer a cognitive test on both clones — which Seth fails spectacularly — and Rudy gets a little mouthy with Paul about Sarah working with Dyad. “That seem right to you? I don’t know her like you do, sir,” he says. (I have a feeling Rudy is so going to regret that comment later.) Paul gives Rudy and Seth their extraction orders, but Rudy points out that they don’t have the original sample yet. Still, they are to report to base, Paul instructs, to which Rudy replies, “Is that coming from Mother or you?”

Instead of following orders, Rudy breaks into Felix’s loft to finish the job. He takes Kira captive while Seth glitches downstairs with Cal, who shows up after getting a warning from Paul. The deal that was cut was to buy Sarah time and space, so why isn’t she taking it, Paul wonders before warning Cal that this is going to end badly for everyone and that he needs to get Sarah out of here. Too late, buddy, but thanks for caring! No, truly, it’s nice to see that there is still some concern and feeling for Sarah on Paul’s part. 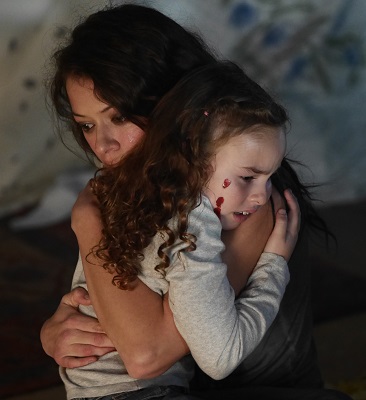 Back at the loft, Sarah pleads with Rudy to let Kira go and confesses that she doesn’t have the original sample. When Seth starts crying out in pain downstairs, Sarah plays on the brother/caretaker angle and how Castor tampered with them, too. Rudy finally releases Kira and then puts Seth out of his misery with a couple shots to the chest.

“It’s alright. I’m here, brother,” he says over Seth’s body. “Don’t hold on. Go easy. I love you.” For a relationship that was created and developed in just two episodes, the bond between them and the goodbye is surprisingly moving.

Rudy spares Cal’s life as he leaves, but it’s still not safe for Kira anymore so Sarah sends her away with Cal to Iceland. So much for the domestic fantasy Cal painted by buying a house nearby. At least they got to enjoy some indoor hockey before it all went to hell. (At this scene, my friend remarked, “They are so Canadian.”) But as far trying to figure out what to do with a child character and having to write out an actor who has limited availability, it’s pretty organic. While they’re away, Sarah vows to put an end to all this and get Helena back, which means going to the male clone they know: Mark, who closes out the episode by burning off his Project Castor two-headed horse tattoo.

Now let’s check in with our other favorite clones:

HELENA | The poor thing gets put through a stress test — is that what they’re calling waterboarding now? — until Castor’s “Mother” stops it because Helena’s pregnant. “I know it doesn’t seem like it, but we’re very happy to meet you,” she tells Helena, who is then subjected to the same cognitive test as Rudy and Seth. Her little scorpion pal chimes in with commentary – “Where are these mangoes? Keep provoking them or we’ll never get any mangoes.” – until Mother once again breaks things up. She tells Helena that her family sold her out, but she’s “not expendable to me or my boys.” 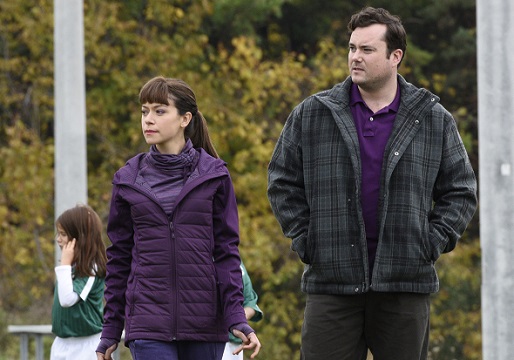 ALISON | In suburbia, as only Alison and Donnie can experience it, the couple decides to buy drug dealer Roman’s inventory and client list since he’s getting out of the business to go to college. Ramon wonders if they have what it takes, to which Donnie replies, “Don’t doubt our stones. We have ample stones.” That is until he hears the price Alison is offering: $32,000. But his wife is sneaky/clever/convincing and points out, “I have just found my voter base [for the school trustee election] and I suspect they will be very loyal supporters.”

COSIMA | The geek monkey experiences a health rebound, which causes her to be “open to perspectives on the void.” When she and Scott visit with Dyad’s top scientist, he confirms that both the Leda and Castor originals were lost, but given how hellbent the Castor clones are on finding it, I’m guessing we don’t know the whole story yet.

Orphan Black fans, what did you think of Episode 2? Did Ari Millen impress you with his four portrayals this week?