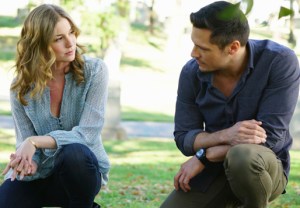 With only three episodes of Revenge left, is it too much to ask for Amanda Clarke to get her happy ending? If we’re talking about her love life, specifically in relation to one Jack Porter, it just might be.

When last we left Jack, he was flying to Los Angeles for a fresh start with Carl, as a too-late Emily watched helplessly from the runway. So can we hope for a Jack-Emily reunion before the season — and likely series — concludes next month? Have fun deciphering this tease from showrunner Sunil Nayar:

“Now that [Amanda’s] living in the world as herself, it gives [her and Jack] a greater opportunity to be who they are to each other,” he tells TVLine. “But it’s also terrifying for them, because there’s so much that’s built in to what this relationship is. You’ll see the nature of how star-crossed they are and how fate always chooses to intercede. The performances these two are giving [in these last episodes] are fantastic.”

Honestly, it sounds like the Jemily ‘ship could sail in either direction. One thing we do know for sure is that, save for a few well-timed flashbacks, we’ve seen the last of Victoria Grayson.

“You’ll see some stuff in flashbacks, which will explain more about what [Victoria’s] state of mind was,” Madeleine Stowe tells us. “Some people feel that Victoria’s story hadn’t fully wrapped up, so there should be, unless something has changed, some very strong revelations which we shot. You’ll get to understand her a little more.”

Revenge fans, are you hoping for a Jack-Emily reunion before season’s end? Drop a comment with your dream ending below.