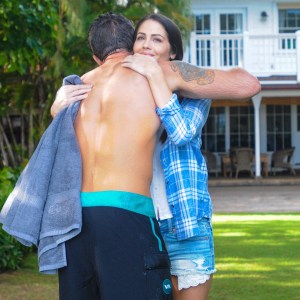 There will be a very special RSVP for Hawaii Five-0‘s season-ending wedding — and TVLine has a first look at the surprise guest (and the warm welcome she receives).

The CBS drama will close Season 5 on Friday, May 8 with two episodes, beginning at 9/8c. It is in the second hour, titled “A Make Kaua” (“Until We Die”), that Michelle Borth returns as Catherine Rollins, who last was seen in the year-ago finale when she chose to stay in Afghanistan to help with a humanitarian issue.

Catherine’s return to Hawaii for Kono’s wedding to Adam comes as a (apparently quite pleasant!) surprise to Steve, who supported her decision to do good in Afghanistan, even if it meant detouring their romance. Plus, as usual, the Five-0 team can use her help with their latest case, which only involves, you know, a nuclear bomb.

Borth made her H50 debut during Season 1 and was promoted to series regular for Season .

Check out the first photo of Catherine’s return above, then share your reaction to her officially confirmed encore.