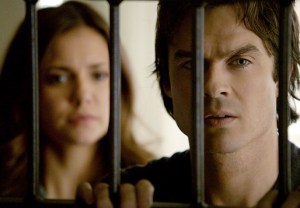 Caroline’s tour of terror finally reached its end on Thursday’s Vampire Diaries — and that wasn’t even the craziest part of the game-changing hour.

No, that honor goes to a vengeful Lily handing the cure for vampirism over to Elena, telling her, “Damon was never going to offer it to you.” (That’s cold, Mama Salvatore. Real cold.)

But rather than ignite yet another fight between the show’s “it” couple — I got worried when Elena started whining about things getting “complicated” — Lily’s revelation led to Damon surprising Elena, and the viewers, with a shocking proposition: He wants them both to take the cure!

“I want you to live in a big city and be a surgeon and have a family,” he told her, adding, “But I’m selfish and I’m so in love with you and I don’t want to lose you.”

While this sounds, in theory, like the perfect solution to Elena and Damon’s eternal struggle, Nina Dobrev exiting the series by her lonesome adds a layer of trickiness to it all. As much as I’d love to see Damon struggle with his newfound humanity, what would be the point of Elena leaving without him? So. Many. Questions! 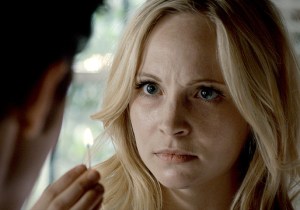 INTERVENTION IMPOSSIBLE | As I mentioned earlier, Stefan was eventually able to reawaken Caroline’s humanity this week, but you can bet your sweet ass…cendant it wasn’t a smooth process. It wasn’t until Caroline was forced to confront the loss of her mother all over again, courtesy of a series of heartbreaking visions, that Stefan broke through to her. And by the time the dust settled, Caroline had burned a letter sent to her posthumously by Sheriff Forbes, which means she’ll never know her mother’s final wishes for her future. (Does anyone have a Ms. Cuddles I can borrow? This episode was a lot to deal with.)

MOMMY FEAREST | We’ve heard a lot about Lily’s ripper side, but we haven’t really seen it in action… until now. Enzo reunited with Mama Salvatore at the end of the hour, only to discover that she’d unleashed the beast on an unsuspecting motorist. I suppose I should take solace in knowing that she felt badly about killing the guy, but her regret doesn’t make me worry any less about her future actions; that lady is crazy! (That said, how hysterical was the lunch scene between Lily and Enzo? Her utter confusion when the waitress asked her about “skins” was the highlight of the episode for me, to be honest.)

BAD. ASS. BONNIE. | I think I speak for everyone when I say, “Three cheers for Bonnie Bennett.” That girl has been through hell this season, and I loved watching her stand up to Damon. “For the first time, I’m choosing me!” she barked at the panicked Salvatore, who feared — and rightfully so — that Bonnie would destroy the Ascendant, thus killing his chance of giving the cure to Elena. (Guess he was worried for nothing!)

All right, TVD fans, let’s talk about this week’s episode: Do you think Damon and Elena will both take the cure? What’s next for Caroline? And how impossibly adorable are Alaric and Jo? Drop a comment with your thoughts below.