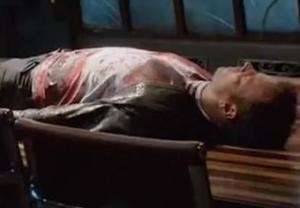 The following story contains spoilers from this Thursday’s Scandal. Proceed at your own risk…

This week on ABC’s Scandal, Olivia & Co. did their best to fix bloody, bloody Jake, Mellie ran into her first real hurdle as a senatorial candidate and Rowan unleashed the show’s umpteenth ominously code-named plan.

Long story short: Jake juuuuuust barely survived the attack by B613 operative Russell, who missed major arteries but hit a lung. With Charlie’s help, Olivia, Huck, Quinn and David get Jake to a “mob doctor” type who as payment wants Olivia to “handle” a situation for him, by getting an assassin friend out of servitude to Mother Russia.

Liv meets the deadly “Black Sable” aka “Mary Peterson” aka Mike’s mom from Mike & Molly and then tracks down her handler, for the purpose of offering him a blank check to let her go free. Nyet! Later, they return to offer him the name of Command and the B613 boss man’s burner phone, to be a hero to Putin. But all that does is get Mary and her young charges (kids? grandkids?) killed. What’s more, the handler himself turns up dead in Olivia’s trunk by the time she exits Mary’s crime scene of a house. Rowan then rings his daughter to remind, “You will never win.”

Back at the makeshift operating theater, the doc bails, seeing as his “payment” bounced, while Liv declares to the team that their affront against B613 is done, finito, over, a dead parrot. But that was all just a bit of theater for nearby Russell, 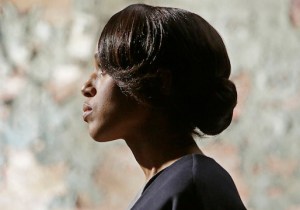 who has been recuperating alongside (and occasionally trying to kill kill) Jake. Because that night, all cozy on her bed, Olivia pulls a gun on her lover and demands answers, including about Rowan’s mysterious new ” “Foxtail” initiative.

Meanwhile on the campaign trail…

Mellie battles the perception (thanks, Sally!) that it’s improper if not illegal for a senator to be married to the President of the United States. The first bid to nip that in the bud sends Cyrus to be a guest on Sally’s news program, where he effectively charges her with misogyny by not allowing the First Lady to hold a job — after all, would Sally have expected First Gentleman Daniel Douglas, “God rest his soul,” to not keep busy? (Cy also delivers an on-point speech about “mom” not being a job, as the old saw goes, but something much greater.) Sally lamely parries with the suggestion that Cy is bitter and deems himself more worthy of a senate run, but I don’t know if that stuck/is true or not.

Even so, Mellie’s numbers still aren’t so great, so Fitz puts in a call to Olivia (they used to have a “thing” back in the day, remember??) and she ultimately offers the suggestion that Mellie play up her access to the White House. That spin works wonders with the Virgina voters that matter but, as Cy warns Abby, will leave them with the legacy of a “whipped president.”

What did you think of “First Lady Sings the Blues” and Jake’s miraculous, Lazarus Pit-free survival?