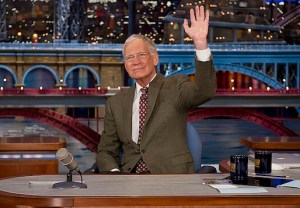 And the No. 1 way to commemorate the conclusion of David Letterman‘s esteemed talk show career: with a primetime special.

CBS has announced that on Monday, May 4, it will present David Letterman: A Life on Television, a 90-minute tribute to the Late Show host and his previous endeavors across a 33-year career.

As previously announced, Letterman is retiring as host of CBS’ Late Show on Wednesday, May 20; Stephen Colbert grabs the reins on Sept. 8.

David Letterman: A Life on Television will be hosted by Emmy-winning TV vet Ray Romano, whose career was propelled by a 1995 stand-up turn on Late Show that led into the development of Everybody Loves Raymond, which was produced for CBS by Letterman’s production company.

Romano will lead viewers through a retrospective of Letterman’s career, starting from his time as a weathercaster in Indiana. The special will highlight the best of Letterman’s interviews as well as denote his trademark show segments, including the Top Ten List and Stupid Pet and Human Tricks.

The special will also look at some of the most important and poignant moments from Letterman’s late-night TV run, including his Late Show broadcast from Sept. 17, 2001, the show’s first outing after the Sept. 11 terrorist attacks.