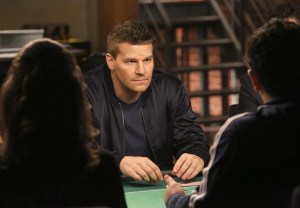 As Bones‘ main couple begins to face a major challenge that threatens to tear their marriage apart in this Thursday’s episode (Fox, 8/7c), their friends/colleagues Angela and Hodgins will be looking towards the next step for their own clan.

“Like a yawn spreads, it will be an examination that rubs off on Booth and Brennan,” executive producer Stephen Nathan tells TVLine. “They also have to look at the life they’ve been leading and how it affects their family and how it might affect their family in the future.”

Given that the pair has been imprisoned, shot at and had their house destroyed, they have to decide, “Is this the life they want to raise children in?”

TVLINE | How serious of a threat is Booth’s relapse into gambling to his marriage?
It’s a big threat to the marriage. All of our stories start to tumble over each other as we approach the end of the season. In the episode where Brennan finds out she’s pregnant, this is also the episode where Booth is having a relapse. We also have prior to that touched on his gambling issues, but it’s really here where they come back full force because he’s investigating a crime that takes place in an underground poker game. So the stories dovetail and later on, it dovetails with Cam and Arastoo’s story where Arastoo has a brother who seems to be dying in Iran and he goes back to Iran to help his brother. Now, he was forced to leave the country so it’s very dangerous for him to go back. While Booth and Cam go back in another episode to Iran to bring Arastoo home, the gambling story really comes home to roost for Brennan. We follow this through the rest of the season, and it’s a tremendous strain and a danger to their relationship and something which really there’s no resolution to. It’s an ongoing issue for them. 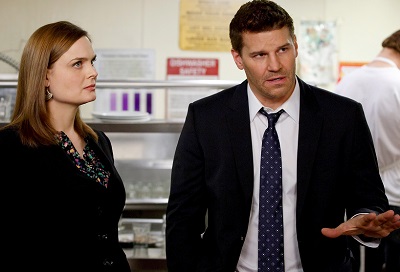 TVLINE | Is Booth able to hide this from Brennan, or does she immediately take notice of what’s going on with him?
It is not obvious. Anyone who has an addiction also has developed a tremendous talent and capacity for self-delusion and for hiding their problem from others. So we’ll be dealing with that aspect of it as well.

TVLINE | Does it start to affect his job and maybe people at the Jeffersonian or the FBI start to notice?
Certainly Aubrey is with him in a very close capacity, working as his partner, so you’ll see all of it. I don’t want to give anything away.

TVLINE | Earlier this season, Daisy named her and Sweets’ child after Seeley. Might Brennan and Booth return the favor?
That we’ll have to see. I can tell you that there will not be a birth this season.

TVLINE | Will there be a time jump then going into Season 11?
At this point, we think there will be, but everything is up in the air. We really have to see what’s happening with Season 11. It was a little bit of fancy footwork writing this finale because we had to write a finale that was both a season and series finale from which we could return.

TVLINE | You mentioned Cam and Arastoo and what they’re dealing with. I’m actually kind of surprised that they’re not engaged yet.
Well, they really are talking about it now. This is something that, next season, will be addressed in a very major way. 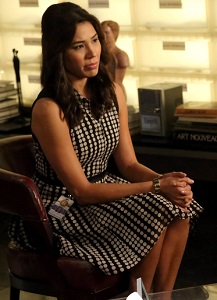 TVLINE | Turning to Angela and Hodgins, what is the next step for them as a couple?
The second half of the season is going to be huge for Angela and Hodgins because Angela has been here temporarily. This is a temporary job. She fell in love with the people she was working with and her devotion to Brennan has kept her there. But at a certain point, certainly after everything they’ve all been through, there is a reexamination of one’s life. That is a natural occurrence in the passage of time. Their relationship has been through a lot, as has Booth and Brennan’s, and Hodgins and Angela will be reevaluating the life they want to live and how and where they want to live it.