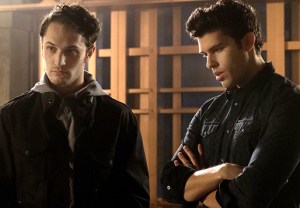 It’s been a few days, but the sting of Monday’s Originals remains strong — especially for those fans of the Jaiden variety.

But even though “Aiden” is no longer with us, Colin Woodell remains very much among the living, and he recently stopped by TVLine’s New York City headquarters to discuss his time in the Big Easy. Scroll down for Woodell’s thoughts on Aiden’s life, death and what he wishes he could say to Josh from beyond the grave.

TVLINE | Given the nature of the show, were you always a little unsure of your future?
Oh, yes. When I signed on to do this show … I wouldn’t say I signed a death certificate, per se, but I would have been shocked if they told me Aiden was going to live for a long period of time. I sat down with Michael Narducci, and seven episodes prior to Aiden’s death, he had an inkling that something was going to happen to Josh or Aiden. They’re lovable characters, but they’re also such easy tipping points to forward the story for the main characters.

TVLINE | Was a part of you crossing your fingers that it’d be Josh?
[Laughs] A little bit, but Steven [Krueger] has such a long history with this show. And, frankly, I don’t even know how one character can exist without the other; they grew so close this season. So I’m interested to see what happens with Josh.

TVLINE | How much did they tell you when you first got the part. Did you even know you’d be Josh’s love interest?
Josh’s love interest was all that I knew, that the character was going to be gay. He was a tough werewolf who was lieutenant-like. But the cool thing about this show is that the creators like to listen to the audience’s response. I think Aiden’s relationship with Josh, more than anything, is what made him lovable. 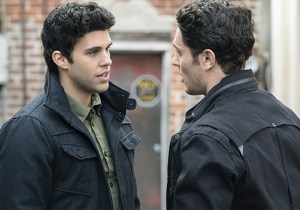 TVLINE | Speaking of the audience’s response, what kind of feedback did you get on Twitter?
Almost all good, and I think that’s rare. [Editor’s note: It’s very rare.] I’m relatively new to the world of Twitter, and I’m not the best at keeping up with it, but it’s amazing to see how much people love the show and love the Jaiden ‘ship. That blew me away.

TVLINE | Have you ever been killed on a show before? That must have been kind of exciting.
I got stabbed on Devious Maids, but I’ve never been killed before. [Aiden’s death scene] was brutal. It lasted for about three hours, and I loved it, because it felt very theatrical. There were no limitations about what I could do.

TVLINE | Having to lay on that table was, I imagine, less fun.
That was the worst. I actually had food poisoning that day, which was awful. Long story short, it was starting to kick in as I was laying there, and I had the funny idea — in the midst of all this — to pop up and gasp. So I did it, and it made everyone laugh, but at the end of the day, they didn’t put it into the final cut. … It was tough lying there. I had filmed everything, so that was the final hurrah, and being sick didn’t make it any easier. But it was weirdly cool to hear all these characters being distraught about my body.

TVLINE | You just shot an ABC pilot, Kingmakers, with two Vampire Diaries actors, Michael Trevino and Kendrick Sampson. Please tell me you traded war stories.
Michael Trevino’s transformation in Season 1 of The Vampire Diaries totally set the tone for what a werewolf transformation would be in this world. So I really studied that, just in case I’d have to do the brutal transformation, and I had a long talk with him about that. I thanked him for doing an incredible job with that, and for leading the way for the wolves.

And since Aiden never got to say goodbye to Josh, we figured we’d ask Woodell to send a message to him (in character, naturally). Hit PLAY on that message below, then drop a comment with your thoughts: Are you still not over Aiden’s death?