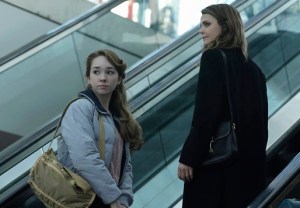 Warning: The following contains spoilers from Wednesday’s finale of The Americans.

For a show about spies, the truth sure didn’t stay hidden on Wednesday night’s Season 3 finale of The Americans.

Overcome with the prospect of lying to everyone in her life, Paige spilled the beans to her pastor about her parents being Russians.

Meanwhile, Philip found himself more and more troubled by his actions as he staged the suicide of Martha’s colleague to cover his tracks and protect Clark’s wife. As for his other spouse, well, Elizabeth looked pretty steely in her resolve as an agent of the KGB when U.S. President Ronald Reagan declared communism “the focus of evil in the modern world.”

TVLINE | How much is Paige going to regret her decision to tell Pastor Tim the truth about her parents?
We don’t know yet! Stay tuned for Season 4.

TVLINE | Paige doesn’t want to be a liar, but at the same time, she just did something really terrible to her family. How do you reconcile that?
This is one of the difficult and terrible things about being in a family where the parents are spies. You end up lying even when you don’t want to. This same thing happened when she was on her way with her mother to West Germany — she ended up lying to Henry about aspects of the trip, probably before she even realized she was doing it. In a way, it means her mother was right at the airport, lying is to a certain degree unavoidable for everyone. Especially for a Jennings.

TVLINE | In the finale – and throughout the season – we’ve seen Philip struggling with what his work requires him to do. At the end, is he about to trust his gut, as EST encourages, and quit? Or does he just want more concrete evidence that what he’s doing is actually helping?
It’s possible to interpret what’s going on inside of Philip in different ways. We think, at the end, when he’s struggling to find the words with Elizabeth, he doesn’t really know what to think or feel. EST is helping him start to ask questions. But that may be as far as he’s gotten at this point. 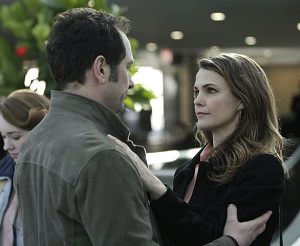 TVLINE | Meanwhile, is Elizabeth more fortified in their cause than ever because of Reagan’s speech?
Reagan calling the Soviet Union an “Evil Empire” absolutely validates Elizabeth’s view that he is a dangerous man with his finger on the nuclear trigger.

TVLINE | Has Stan just made his work situation even more difficult for himself? Has he made an enemy out of Gaad?
Things are not looking good for Stan and Gaad. It’s hard to imagine their previously close relationship going anywhere but down the tubes at this point.

TVLINE | With Nina having struck this bargain for her life, could Stan and Oleg get her out even if the FBI wanted to?
Stan and Oleg don’t actually realize the situation Nina is in right now. In a way, she’s in significantly less danger than she was when they started formulating their plan to save her life. She has come up with a way to save her own life. On the other hand, there may be fresh dangers lurking at Anton’s Scientific Facility.

TVLINE | I’m surprised Martha’s gun did not go off this season. Was that a Chekhov’s gun red herring?
Who is this Chekhov guy you are talking about? We think it’s time to rewrite that rule. But we’re not telling you yet what the new rule is.

TVLINE | We haven’t seen Kimmy in a couple episodes. Will there be more follow-up to that storyline next season?
Kimmy, like many of Philip and Elizabeth’s agents, is part of an ongoing operation. You never know when she’s going to pop back up again.

TVLINE | Poor Henry has been left unattended quite a lot this season — or in the care of Stan. Should we be worried about him? Could he become a future FBI agent?
Ha! Absolutely. If you lived across the street from Stan, he might seem like a pretty good role model.