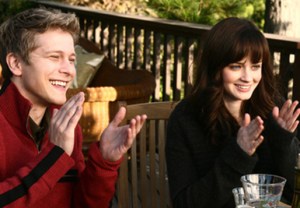 Austin, Texas, is starting to look a lot like Stars Hollow, Conn.

Czuchry, who portrayed Rory Gilmore’s wealthy beau, Logan Huntzberger, will be joined by Danny Strong (Doyle), Todd Lowe (Zack) and Jackson Douglas (Jackson) at the panel, which will take place on the festival’s closing night.

* True Detective has released an animated poster for its upcoming second season, bowing June 21 — and it’s just as ominous as you would expect. Check out the art below:

* Katie Holmes and producer Mike Daniels (Sons of Anarchy) have teamed to develop an untitled action drama at Cinemax, Deadline reports. The project centers on a victims’ rights advocate who, after being attacked by a stalker, must revisit her criminal past to seek justice.

* Disney XD has renewed its animated series Penn Zero: Part-Time Hero for a second season, per The Hollywood Reporter.

* Griffin Dunne (House of Lies, Red Band Society) will recur in Season 2 of Manhattan, playing Woodrow Lorentzen, a self-destructive newspaper reporter who gets inside the gates at Los Alamos and finds a chance to turn his life around.