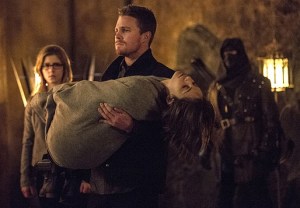 On Wednesday’s Arrow, Oliver and Felicity consummated their relationship, but the brief moment of romance was cut short as they said their goodbyes.

In exchange for using the Lazarus Pits to save Thea’s life, Oliver assumed his position as the Heir to the Demon — despite Felicity’s hilarious attempt to drug and sneak him out of Nanda Parbat. Although they eventually bid farewell to each other, the pair won’t be separated for long — but it won’t be an entirely happy reunion.

Below, executive producer Marc Guggenheim previews the heartbreaking aftermath of Oliver’s decision, the future of “Olicity,” the side effects still awaiting Thea and more.

TEAM ARROW SANS ARROW | With Oliver choosing to stay behind in Nanda Parbat, “the character journey of [Episode] 321 is how the hell Team Arrow moves forward without Oliver,” Guggenheim previews. Whereas last time the group thought he was dead, “knowing that he’s out there and alive, but a member of the League of Assassins, that’s a whole lot harder” for Team Arrow to handle, the EP adds.

“There is a real trinity formed between Laurel, Diggle and Felicity,” Guggenheim says. “They’re all leaning on each other. They’re processing things in different ways. Laurel is throwing herself into her work saving the city. Felicity is struggling with heartbreak and grief. She really goes through the seven stages of grief with Oliver. And Diggle, something happens in [Episode] 21 that really upends Diggle’s world, certainly vis-à-vis Oliver. That’s something that will have repercussions for the remainder of the season.”

The EP adds that next week’s hour is “one of our most emotional episodes” because it’s a baddie-of-the-week installment in which “the villain of the week is Oliver.”

So with the hero giving in to the darker nature of the League, what does his future hold? 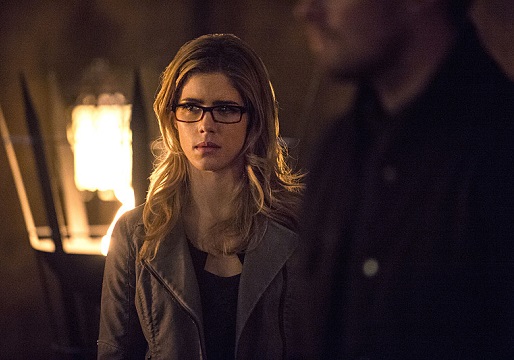 BETWEEN THE SHEETS | It finally happened: Oliver and Felicity succumbed to their feelings. Guggenheim says, while the episode was coming together in the writers’ room, “there was a strong desire to have Oliver and Felicity sleep together before the events of the season finale, which isn’t to say that we were going to have them sleep together in the season finale.” He adds:”We wanted to take that off the table prior to the season finale. We knew Episode 320 was the episode to do it in. We went back and forth in the writers’ room about the right venue for it. Like does it happen in Starling City? Does it happen in Nanda Parbat? And as you can see, they end up sleeping together in Nanda Parbat. We liked the romance of that.”

And surprisingly, the man earning the biggest portion of Felicity’s ire was the one who helped make the magic moment happen. “I’m, personally, fond of the fact that it’s Ra’s who gives her the final push” to confess her feelings, the EP continues. “One of the things that I keep seeing on the Internet is [that] Felicity has never told Oliver that she loves him, and that was very deliberate. We were holding that back this season. The same way we were holding back them sleeping together, we were also holding back her saying, ‘I love you,’ to him. We wanted it to be part and parcel of that moment.” 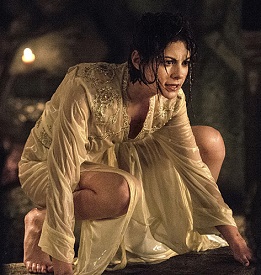 A QUEEN REBORN | Although Thea regained her memory — and sass! — by episode’s end, her dip in the magical waters doesn’t mean she’s necessarily out of the woods. “You can expect that there will be more consequences,” Guggenheim teases. “We established very clearly that the Lazarus Pit returns you, but not always in the condition in which you left. So there’s a lot of stories to be told with Thea and her recovery.” And with Malcolm vowing to stay by her side, there’s “a nice bit of closure” between father and daughter “by the end of the season.”

THE HEIR THAT WAS | Fans of Nyssa won’t want to miss next Wednesday’s episode. “We’ll learn how she reacts to things and how she’s dealing with life post-[Episode] 316,” Guggenheim reveals, “and how Oliver’s joining the League affects her, both emotionally and as a practical matter. There’s a lot of Nyssa still to come, and she looms very large in these final three episodes.”

Arrow fans, did the “Olicity” hookup meet the hype? Are you looking forward to Evil Oliver? And what’s your theory on Diggle’s mysterious storyline?