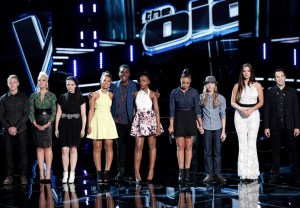 The Voice‘s “Twitter Save” is a curious thing. It asks us to (possibly) veto the will of Monday-night voters in exchange for adding a heaping teaspoon of sriracha to the unflavored polenta that is a typical results-show telecast.

But riddle me this: What if NBC insisted you go to Myspace to rescue a member of the Bottom 3 from being sent to the guillotine? Or if you were forced to create a Vine (the absolute WORST) to make yourself heard? Would you go out to the nearest intersection and create a makeshift smoke signal in an effort to keep a particular singer in the mix?

OK, sure, these are silly questions. But as actively as I participate in NBC’s social-media shenanigans every Tuesday, I also occasionally yearn for the simpler times when the final tally was the final tally,  when NBC couldn’t rig the “Save Me” performance order to help ensure Adam Levine — who appears as disengaged in the Season 8 process as a sleepy high-school senior during morning announcements — doesn’t get completely wiped out prior to Top 8 performance night.

Before I go full conspiracy theory on you, however, let’s cut to the results…

Bottom 3/”Save Me” Performances
Team Xtina: Rob Taylor — “(Sittin’ on) the Dock of the Bay” — Grade: B- (Hated the rushed tempo, but it was mostly in tune)
Team Adam: Deanna Johnson — “Help Me Make It Through the Night” — Grade: C+ (Some rough notes up in there — lovely tone, though)
Team Adam: Joshua Davis — “I Won’t Back Down” — Grade: C+ (This cover had less life in it than a trout who’s spent three days on a dock)

Rob’s slim win — plus my love of Xtina, and Rob’s prior high point of “Earned It” — sent me into a Twitter frenzy.

Alas, my efforts were in vain.

Really Awesome
That Pharrell/Koryn/Sawyer cover of the otherwise played-out “I Don’t Want to Be” (Dang, those kids can sing!)

OK, your turn. What did you think of Top 10 results? Did America get it right with the Bottom 3? Was the right artist saved? If not, what would you have done differently? Sound off in the comments!