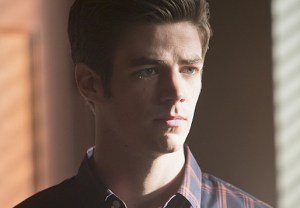 This week on The CW’s The Flash, Barry, Eddie and Caitlin contended with a shapeshifter, while Joe and Cisco dug up Dr. Wells’ dirty little secret.

Shapeshifter episodes on supernatural and sci-fi series are a double-edged sword. Yes, you get to “have fun” with mistaken identity and “ZOMG they kissed!” fake-outs. But the thing in this specific instance, when dealing with the brain trust that is the S.T.A.R. Labs team, is that smart people should behave a little smarter.

Meaning, when you are well aware that a shapeshifter is in your midst — and has already hijacked Eddie’s body — you don’t turn your back on Eddie, Barry, when he remarkably is suddenly “released” from police custody.

Meaning, Caitlin, that when Barry is acting a bit “off” and suddenly lays one on you, you don’t brush it off without for a moment realizing, “Barry isn’t acting like himsel– ZOMG it’s not really Barry!!!”

Sure, we “need” such slip-ups to drum up the drama, but nonetheless they do distinctly smart characters no favors. But at least this much came out of it: Iris got a half of a half of a half of the truth told to her, when Eddie revealed that he has been working with The Flash. It’s a start, especially given how rude he was to her at the top of the episode.

Beyond the Everyman storyline, Joe and Cisco traveled to Starling City to check out the site of Dr. Wells’ tragic car accident from 15 years ago, where with Quentin Lance’s help they uncovered a body long-buried nearby. Later in Central City, Barry reveals to Caitlin their findings: The corpse’s DNA is an exact match for Dr. Wells. Meaning, their mentor very much did walk away from that accident as a “different person.” (Also in Starling City: Black Canary fanboy Cisco hooked up Laurel with an amped-up “Canary Cry” gizmo, in trade for an autographed photo.)

Then, in the post-credits tag, Cisco, Barry and Caitlin discovered Wells’ secret room, inside which they found the Reverse-Flash suit as well as that newspaper from 2024, which declares “The Flash Missing.”

NOTABLE AND QUOTABLE:
* Nice Coast City (“Home of Ferris Air”) nod in the intro, though I need someone to explain how that superspeed-delivered pizza didn’t arrive as a lump of cheesy mush.
* Caitlin has to be the worst liar ever. Would love to play poker with her.
* Is Hannibal Bates the most on-the-nose villain name ever? Is his middle name Krueger?
* When Hannibal morphed into Eddie the first time, where did the gun come from?
* Similarly, and I have this problem with “invisibility” powers, too: How is your biologically based gift able to alter textiles worn outside the body?
* “I knew it!” Caitlin was highly amusing in the aftermath of the kiss, which she seemed to like a bit too much as it happened.
* During daytime, Joe and Cisco asked Lance to show them the accident site. Night falls and passes during the Eddie/Barry/Everyman chase. Joe and Cisco arrive at the accident site during daytime. So, it took Lance 24 hours to show them…?
* Am I perhaps the only person who hears the word “transmogrify” and immediately thinks of Calvin and Hobbes‘ cardboard box invention?
* I’m unclear on that antepenultimate scene: What was the corpse’s DNA matched to? Wouldn’t the fake Wells have Matt Letscher’s DNA? And/or vice versa?
* There’s a show to be made — for an older-skewing audience than The CW’s — where Joe, Lance and Wells hang out and drink beers.
* With all of his next-gen technical expertise, the “key” to Wells’ secret room isn’t biometrically accessed?

What did you think of “Who Is Harrison Wells?”

Want scoop on The Flash, or for any other show? Email insideline@tvline.com and your question may be answered via Matt’s Inside Line.