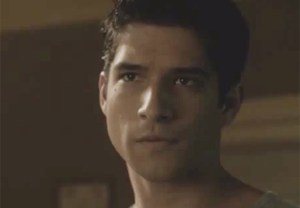 Season 5 will kick off with a two-night premiere on Monday, June 29 and Tuesday, June 30 at 10/9c, MTV announced Tuesday during its upfront presentation in New York. New episodes will then air regularly on Mondays.

As with previous seasons of Teen Wolf, very little is known about the drama’s upcoming crop of episodes this early in the game. All we can really expect, based solely on the first promo, is that Scott and his pack will face a harrowing new threat known as “the Doctors.”

“They’re very scary,” Tyler Posey (pictured below at the event) tells TVLine of the new Big Bads. “When I first read this season, I was so excited about these villains — more excited than I have been about any villains before. They’ve got powers we’ve never seen before, they’re tall as hell and they’re awesome.”

We also know this about Season 5, courtesy of executive producer Jeff Davis: “It’s very much about our teenagers becoming adults and heading into their senior year. But as always, we bring in some new mysteries and new monsters. I think this season is very much about the line between science and supernatural.”

Give the above promo another spin, then drop a comment with your hopes for Teen Wolf Season 5 below.