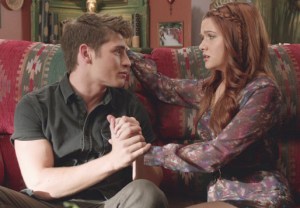 It looks like Amy and Liam will have even more time to get back into Karma’s good graces, as MTV’s Faking It has been renewed for a third season.

The news dropped Tuesday during the network’s upfront presentation in New York, where star Katie Stevens was on hand to represent Team Karmy. And speaking of Karmy, Stevens tells TVLine that it’ll be anything but smooth sailing for the besties-on-the-rocks moving forward.

“Karma’s going to go through her process of forgiving Liam and Amy,” Stevens tells us, acknowledging that what they did was “a pretty big betrayal.” She also revealed that their actions will take a toll on who Karma is as a person: “What I’ve always loved about Karma is that she looks at life in such a romantic way. She’s so optimistic and has a vision for how she wants her life to go — but this betrayal changed her view of the way she sees things.”

She’s also “going to struggle to figure out who she wants to be,” Stevens teases, “as most 15-year-old girls do.” And as much as she’ll long for a return to normalcy, “things can’t always go back to how they were.”

Faking It returns for the second half of its sophomore season on Monday, Aug. 31 at 9:30/8:30c. Drop a comment with your hopes for Karma, Amy and the gang below.