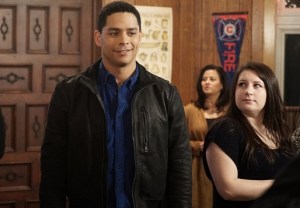 Chicago Fire bid farewell to one of its own on Tuesday night as Mills (played by Charlie Barnett) left Firehouse 51 to open a restaurant in North Carolina with his family.

While Barnett will no longer be a series regular on the NBC drama, viewers can take comfort in the fact that his non-deadly departure left the door open for a return. And Dawson can always think back on that unexpected kiss Mills planted on her before taking off.

Below, executive producer Matt Olmstead talks about the “difficult” decision to say goodbye to Mills, the new faces coming in to fill his position and what that smooch means for Dawson.

TVLINE | What brought about the choice to have the Mills character exit?
In the writers’ room, we have a board with all the characters and all the episodes, and we’re pretty vigilant here about making sure that storytelling is fresh. Especially with a relationship-based show, you never want to get stagnant, and you have to be tough-minded sometimes… It was time to shake things up. It came solely from a storytelling standpoint. He’s an amazing individual and a fantastic actor and gave us so many different things, but it was just this going to give us, hopefully, some new blood in terms of a new character and the departure of [Mills] is going to affect other people. So it’s invigorating storytelling-wise.

On a personal level, it’s very difficult. I have a great affection for Charlie. The worst part of the job is when you have to let somebody go. I have no doubt about the prospects of his career; he’s going to do fine. I was on Prison Break, and the same thing — there are people you never want to let go, but you had to bring new people in, you had to show the audience that there’s real teeth to the consequences out there.

TVLINE | After the devastated response when you killed off Shay, was this a conscious decision not to give him such a sad ending?
No, it wasn’t. Not because of any selected negative viewer response to Shay’s death, but having just already done that, just internally for us, it was a different exit we could do as opposed to repeating ourselves. So we went a different route.

TVLINE | It is a pretty opened-ended exit in some ways. No one dies, Mills makes some overtures before he goes. Do you have any plans for him to return in some capacity?
We have nothing scripted. I’m sure Charlie’s going to be gobbled up with multiple offers to work elsewhere. But I’d be lying if I said that we didn’t have it in our back pocket, the opportunity — if down the road all parties come together and there’s mutual interest — for him to return for whatever. It was factored in when we conceived the way his character was going to depart, but for now, he’s off to North Carolina.

TVLINE | How did Charlie take the news when you broke it to him?
It’s never easy. He was completely professional, grateful for the opportunity. It’s slightly unexpected when it happens, but he was so professional and was concerned about how we felt. But then when the other actors found out, they were the ones who kind of fell apart. They were really upset and emotional… Keep in mind, it’s different when you’re filming a show in another city. If it’s Los Angeles, it’s a little different. But in Chicago, they have each other. They’ve worked together now for three years. They are a tight group. It’s not a bunch of older, married with kids actors who all splinter off and go do their thing. It’s not an ensemble where it’s populated by headcases who no one wants to hang out with and everybody just takes off after they wrap. They socialize together. They travel together. They do stuff together. Some are roommates. They’re tight. They’re as close to a family as they’re going to get without the blood. So it was hard.

TVLINE | You could really feel that onscreen. Watching a lot of the scenes, especially the giant group hug, it felt like real life was bleeding into the show.
In that scene, there’s no doubt. That wasn’t even scripted. That was just spontaneous in terms of the actors feeling it.

TVLINE | Was there a particular scene that was difficult for you? There were so many emotional goodbye moments in the episode.
Michael Gilvary wrote the episode. He’s been with us from the very beginning. I worked with him on two years of Breakout Kings prior to this. He’s one of our top writers. When I read what he wrote — and it’s all him — there was some stuff that definitely got you in the throat. When he’s saying goodbye to everybody at the bar, you just knew that was going to be a tough one to film. Also the scene midway through where he’s at the hall of badges and he’s looking at his dad and the decision’s made right there that he’s honored his dad’s legacy. At that point, he’s making the decision to go with his real family, his sister and his mom, who need him; though everyone’s an adult, when you’re the man of the house, you’re the man of the house. That was also a really great scene. It’s funny because the first couple incarnations of that scene, there were versions where we talked about where he was contentious with Boden and we came to the conclusion he needs to be resolute and dignified, which is how we really wanted his exit to be from the very beginning. We didn’t want him getting killed. We didn’t want him leaving in disgrace. We wanted him to leave with his head held high and knowing that he completed a fairly dynamic and full journey on the show for three seasons. 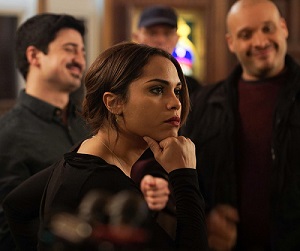 TVLINE | Mills is clearly not over Dawson, but she looked pretty surprised by that kiss. Is that weighing on her at all in the upcoming episodes?
No. It’s still in the back of her mind. It was a surprise for her. But then also, you realize, “How can it not be in the back of his mind?” They were a couple. He was way into her. As in life, rarely do two people walk away from a relationship and it’s 50/50 where they both feel the exact same way. Usually one prompts the departure and the other one is left with these lingering feelings and, certainly, he was that one in that relationship. So it was his, “Whistle for me if you ever need me.”

TVLINE | Is she going to mention the kiss to anybody? Or is it one of those things where she doesn’t feel the same way so it’s not worth talking about?
It’s funny, we talked about that. It’s not like it’s not worth talking about, because it is definitely significant and noteworthy. But she doesn’t tell anybody, because she wouldn’t want to diminish the importance of it actually and marginalize him by turning it into some kind of gossipy story. She gets what went behind that, and there is a lot behind that. To honor him, she’s going to take it for what it was, which was a very nice compliment.

TVLINE | How is Mills’ exit going to affect the rest of the firehouse?
We play it out. The beginning of the next episode starts with a very quiet firehouse gathered in those chairs in the briefing room as Boden is introducing the replacement, and they’re not too thrilled about it. It takes them a while to warm up to the new person because, just as in life, they worked together 24 hours at a clip and they are tight as a family. [Mills] was there from the beginning. So they can’t just shift gears that quickly, though Boden would rather they did shift quickly and welcome the person. It’s a little bit of a thawing out for them to be able to welcome the new arrival.

TVLINE | Is the new arrival a paramedic or a rescue squad person?
Paramedic.