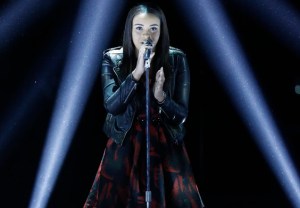 The Voice is not typically known for tough criticism. On any given night, the coaches’ critiques range from “Your vocal was smoother than a blanket made from a unicorn’s underbelly!” to “You took me through a dozen cycles of life, death and reincarnation (as a unicorn’s underbelly) in the course of a 90-second performance!”

Tonight, however, not only featured Xtina winning her umpteenth gold medal in not-even-trying-to-be-subtle shade-throwing (“Wow! That sounded pretty challenging! How did you feel?”), but also unprecedented cases of the show’s all-star panelists offering something less than hyperbolic praise to their own contestants.

Blake Shelton dinging Corey Kent White for a lyrical flub? Adam Levine noting that “in some ways [Joshua Davis’ risks] didn’t pay off”? Somebody burn some sage at center stage — because the ghost of 2004-era Simon Cowell may be haunting those beloved red spinning chairs!

In any event, it was a night of high highs (hi, Koryn) and surprising lows (what the heck happened to Joshua?) — a surprising gap in a season where the bench has felt as deep and solid as a California redwood for a good two months, now.

Anyhow, since nobody reading this recap actually tunes in for The Tough Love of Miranda Lambert’s Hubby and The Guy Who Sang “Happy,” let’s get on with my letter grades for Top 10 Performance Night: 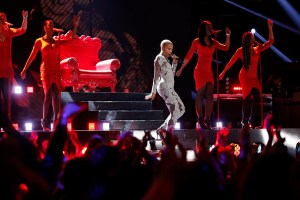 Team Xtina: Kimberly Nichole — Etta James’ “Something’s Got a Hold on Me” — Grade: A | As Adam noted, momentum is a tough thing to create in a reality-singing competition — which makes it all the more fascinating to see how Kimberly manages the task despite the fact that her trajectory from Kilimanjaro to Everest to McKinley (vocally speaking) ought to leave her with nowhere to go but down. The sparse, almost a cappella portions of her Etta James cover spotlighted the growly brilliance of her tone and her flawless pitch, and the complex soul jam also proved a reminder of her deliciously rumbly lower range, impeccable sense of rhythm and legitimate chance to take home the Season 8 crown.

Team Adam: Joshua Davis — James Bay’s “Hold Back the River” — Grade: C+ | Warning to Voice contestants: Never begin a performance in the dreaded, arhythmic SwayBot pit. Exhibit A: The typically consistent Joshua getting caught up with those ghouls, then betraying a nearly nonexistent lower register throughout the song’s opening verse. He fared even worse with the shrieky, “Look, Ma! The blood vessels in my neck are exploding!” final chorus. Blake slyly noted Joshua had been “pushed harder than you’ve ever been pushed” — the country coach delivered those stinging words almost as if they were a compliment! — but Adam’s discouraging remark that in some ways Joshua’s risk hadn’t paid off, came as close to “Actually, don’t vote for my team member” as we’ve heard in many seasons.

Team Blake: Hannah Kirby — Tears for Fears’ “Shout” — Grade: C- | I chuckled the minute Hannah announced her song choice — seeing how she’s spent most of her Voice run SHOUTING HER LYRICS LIKE A BANSHEE. Her “Tears for Fears” cover was similarly void of nuance, but with additional off-putting elements: A face that volleyed between tentative confusion and random grin; a tone that got painfully shrill as the song crescendoed; and an outfit stolen from Janet Jackson’s “Rhythm Nation” video (with a flowing train attached). We lost Mia Z for this? 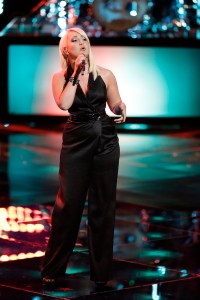 Team Blake: Meghan Linsey — Marc Broussard’s “Home” — Grade: B+ | I totally understood why Meghan got Standing Os from all four coaches — even if I didn’t find myself quite as blown away by her performance. Oh, sure, this might be the exact kind of music the former country chart-topper ought to be covering — a hard-charging blues jam that allows her booming, bombastic voice to shred and break (though never lose control). I just wish that on a song with repeated lyrical references to feeling the groove that Meghan hadn’t fallen ever so slightly out of the pocket. Still, the shift back to uptempo after last week’s melodramatic ballad was a wise one – and ought to keep Blake’s front-runner on her expected Top 5 trajectory.

Team Pharrell: Koryn Hawthorne — Ed Sheeran’s “Make It Rain” — Grade: A+ | Just when I started thinking that this episode had been ruined by putting Kimberly first (thereby making the two hours that followed seem mundane by comparison), along came the Season 8 dark horse with a performance with more thrills than a weekend at Six Flags (and a free pass to skip all the dreaded lines). Kudos to Pharrell for some brilliant staging — a darkened stage with Koryn illuminated by just a few stark beams of light — which took away any and all distraction from the 17-year-old’s beautifully varied vocal. The kid has got insane range — her swooping lower notes in the verse proved just as potent and on-point as her wailing on the chorus — and there are more colors in her voice than a 64-pack of Crayola. Here’s hoping she continues gravitating toward unexpectedly perfect song choices — and makes Season 8 a truly unpredictable affair.

Team Adam: Deanna Johnson — Jefferson Airplane’s “Somebody to Love” — Grade: C- | There’s no denying that Deanna’s got a glowing, ethereal tone, but I still don’t think she has a real sense of what she’s doing with it. I couldn’t understand a single word coming out of her mouth during the verses — I know, I know, an ironic complaint coming from a Mia Z superfan — which, along with her vacant facial expression, gave rise to the vibe that Deanna felt no connection to her song choice whatsoever. The last third of the song found the striking beauty getting steamrolled by the band and struggling with pitch (thus, Xtina’s “That sounded pretty challenging!” put-down), an unfortunate turn of events for a gal who needed the Twitter save last week (and probably will again on Tuesday).

Team Xtina: Rob Taylor — Donny Hathaway’s “A Song For You” — Grade: C- | Ever order a simple sandwich and have it come back with a dozen surprise condiments? (Pickle relish, mustard, ketchup, garlic aioli, honey dijon, red-pepper jam, horseradish, sriracha, pico de gallo, awaze, Miracle Whip and remouláde?) That’s how I feel about Rob’s vocal performances. There’s just too much of everything all at once. And Rob’s choices on “A Song for You” suffocated the gloriously simple love song before he was even halfway through with it. I wish Xtina had instructed him to stay at the piano from start to finish, and insisted he keep the performance as small and contained as possible. But I supposed that’d be like asking a full-grown lion to give a gentle backrub to an elderly impala. At some point, it’s going to end up a bloody mess. 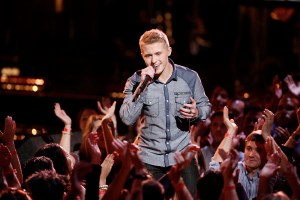 Team Blake: Corey Kent White — George Strait’s “Unwound” — Grade: C | Confession: I didn’t actually notice the botched lyric that Blake so helpfully pointed out in his critique. As usual, though, Corey’s pitch had almost as many misses as it did hits, and he once again showed an irksome tendency to throw away the ends of phrases. On the plus side, there’s something very appealing about the Corey’s scratchy tone, and his choice of a cheeky, “dude doing wrong” anthem gave us a little relief from an awfully earnest set list.

Team Pharrell: Sawyer Fredericks — The Goo Goo Dolls’ “Iris” — Grade: B | It’s telling that my least-favorite Sawyer performance this season still ranks him in a tie for fourth place for the episode. (This kid is soooo going to be in the finale — unless Pharrell assigns him an Ozzy Osbourne song and demands that he bite the head off a bat, or some such nonsense.) Still, despite a handful of iffy notes on the verses, “Iris” was pretty enough, I suppose. It’s just that, since his epic “Man of Constant Sorrow” audition, Sawyer’s performances have been stuck in a quietly tasteful, midtempo mode. Here’s hoping Pharrell lets the kid rock out — and explore the roots-blues colors of his voice — in the coming weeks. Variety’s not just the spice of life, after all, but also a good formula for winning The Voice. 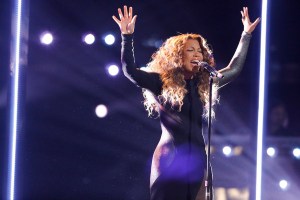 Team Xtina: India Carney — Whitney Houston’s “Run to You” — Grade: B | India was a curious choice for closing the show, since the Masterful Diva + Whitney Ballad + Pimp Slot formula had me thinking we were about to witness something on the level of Tessanne Chin’s “I Have Nothing.” India, alas, had nothing on Tessanne’s greatest hit — as there were some noticeable struggles on the falsetto edges of the chorus (and that final run), not to mention a feet-planted physical stiffness that kept me emotionally at arm’s length. By no means will this effort put the opera-trained beauty at risk, but I’m doubtful it picked her up too many new fans, either.

OK, your turn. What did you think of The Voice‘s Top 10 performance night? Who were your faves? Who’s in trouble? Take our poll below, then hit the comments to expand on your thoughts!