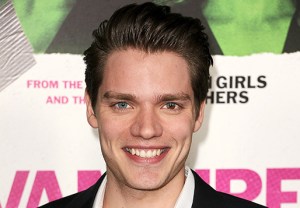 ABC Family has gone across the pond to find one of its Shadowhunters.

As previously reported, the series will follow a girl named Clary Fray (who has yet to be cast), who discovers on her 18th birthday that she’s a Shadowhunter: a human-angel hybrid born to hunt demons. Following her mother’s kidnapping, Clary teams up with a fellow Shadowhunter (Sherwood’s Jace) and her best friend Simon to fulfill her destiny.

Sherwood — whose TV credits include British series The Cut and Mayday — recently starred as the male lead in Taylor Swift’s “Style” music video.

* Happy 4/20, HBO! The premium cabler is developing six new episodes of High Maintenance, a web series originally available on Vimeo. The comedy stars Ben Sinclair (30 Rock, The Big C) as “The Guy,” a Brooklyn pot dealer who delivers to an array of eccentric clients.

* ABC News has released a new teaser for Bruce Jenner: The Interview, airing this Friday. Check out the latest promo below, in which Jenner (briefly) discusses his family: