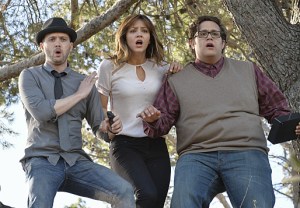 If you’re anything like me, you went into Monday’s Scorpion finale feeling a little skeptical.

Even though the CBS drama was taking on its most extravagant case yet, it also involved Walter clinging to life on the edge of a cliff. As in, the leader of Team Scorpion and the protagonist of a show that’s already been renewed for a second go-round. Knowing full well that Walter would likely survive this ordeal, you may have worried, like I did, that the season ender would lack the very suspense it was hoping to create.

Fortunately — even though Walter made it out alive, of course — the hour was fraught with tense moments, thanks in part to a silver pen, a construction crane and… a crow? (Yes, you read that correctly.)

Before you give us your thoughts on the season finale, a brief rundown of what happened in the climactic hour:

Eight hours after Walter went sailing through a guard rail on Mulholland Drive, Team Scorpion — what’s left of it, at least — is trying fruitlessly to get in touch with its fearless leader. But don’t expect any help from Cabe or Paige: The former has been reassigned to a boring TSA desk job, and the latter is bound for Maine with Ralph, whose unreturned voicemails to Walter have him increasingly worried.

Happy, Toby and Sylvester are able to track Walter’s car via its VIN number, and it isn’t long before they find Walter… perched on the edge of a cliff, guaranteed to go tumbling 300 feet downhill with even the slightest movement. Super. 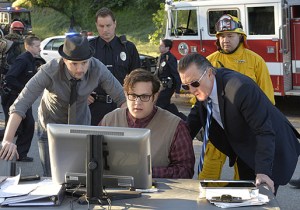 As they work with the fire department (and Cabe, who shows up without actual Homeland credentials, but who cares?) to get Walter rescued, Team Scorpion encounters a few major setbacks, which they can visualize with a drone that Happy fashions together. First, Walter’s car threatens to become completely engulfed in flames. (Solution: Happy drains the flammable oil from the car with the help of a syringe dart she shoots from hundreds of feet overhead. Seriously.)

Next, the section of the guard rail that had impaled Walter’s side gets dislodged, giving him approximately four minutes before he bleeds out. (Solution: Toby talks Walter through cauterizing his own wound, using a silver pen that he basically has to stick into his spleen. Icky.)

Then, as if all of this hasn’t been enough for poor Walter, a 1.2-pound crow lands on the roof of his car, shifting its weight just slightly — but if the crow takes flight again, down will come Walter, vehicle and all. Throughout all of this uncertainty, Walter takes a moment to apologize to Cabe for his overreaction about Baghdad, and strolls down memory lane with Toby and Happy. These could very well be his last moments alive, it seems, and the only people who aren’t there to say goodbye are Paige and Ralph.

That all changes when the aforementioned duo finally get to the airport and see the news story about Walter’s crash on TV. They race to Mulholland Drive, where Happy is enacting the plan that will finally, hopefully save Walter: She’s going to hoist Cabe up on a construction crane, which will be lowered down into the canyon so that Cabe can grab Walter before his car makes a break for it.

Just as Cabe reaches Walter (and seconds before Walter confesses something major to Paige, presumably), the crow takes flight once more, causing the car to go crashing down to the bottom of the canyon — just as Cabe removes Walter from that metal death trap. (I can’t be the only one who breathed a major sigh of relief, even though, again, Walter’s survival was pretty much a foregone conclusion.)

Later, at the hospital, Paige and Ralph decide to stay in California (and rejoin Team Scorpion, at that!), while Happy finally extends an olive branch to Toby weeks after he accidentally stood her up. Paige, meanwhile, visits Walter’s room after the morphine has knocked him out, planting a kiss on him before telling him she really cares about him. (OK, so, maybe it wasn’t “I love you,” but that kiss has to mean something, right?)

OK, your turn. Was Scorpion‘s season finale everything you hoped it would be? Grade the episode in our poll below, then hit the comments to back up your choice!