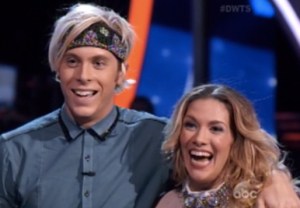 Oh, to be a fly on the wall when the producers of Dancing With the Stars were brainstorming the weekly themes for Season 20.

I totally understood the corporate cross-promotion of last week’s Disney theme, and the emotionally charged Most Memorable Year motif of the week before that. But I’m struggling to figure out the exact components that made up this week’s Spring Break theme, other than the obvious climb in temperature that we’ve seen since Punxsutawney Phil poked his head out in February and reminded us he’s useless.

Even though a handful of Monday’s routines revolved around beachy themes, most of them had absolutely nothing to do with spring break. A Viennese waltz set to Olivia Newton-John’s “Hopelessly Devoted to You”? A samba danced to Jason Derulo? For most of the evening, the disparity between this week’s theme and the actual performances was as jarring as Julianne Hough’s pink locks.

That’s not to say the most recent Dancing installment didn’t give us plenty to talk about. Here are some of the highlights from Monday’s episode:

BEST OF THE NIGHT | Riker Lynch and pro Allison Holker (Samba) — I know, I know, I haven’t been very versatile in choosing the winner of this superlative in recent weeks. For the record, I had every intention of awarding the week’s top honor to Rumer and Val, whose bootylicious routine was sexy and energetic (if a bit frothy). But then Riker and Allison took center stage and delivered a samba which, not unlike the Energizer bunny, just kept going and going and going. Thanks to his time in the band R5, Riker has an incredible musicality coursing through each of his movements, allowing him to match Allison step for step. A few of Riker’s lifts were just a smidge too powerful, causing Allison to slip on the dance floor from sheer velocity, but I much prefer to watch a couple that needs to tone down its energy rather than kick it up a notch.

MOST DISAPPOINTING “COMEBACK” | Robert Herjavec and pro Kym Johnson (Jive) — After Robert failed to keep up with Kym in last week’s quickstep, I was surprised to see Robert tackling the jive, which is equally as fast-paced. Even without Carrie Ann Inaba’s condescending praise — “Let’s give him a hand for not missing any steps!” — it was clear that Robert still wasn’t matching his partner’s rhythm and grace. I give Robert all the kudos in the world for the enthusiasm with which he has tackled every number this season… but it might be time for him to take a page from Chris Soules’ book and really work on counting the beats in rehearsal.

MOST IMPROVED | Chris Soules and pro Witney Carson (Viennese Waltz) — Speaking of Chris, that rehearsal technique from Julianne proved to be Prince Farming’s saving grace on the dance floor. For the first time in a long time — perhaps ever? — Chris didn’t spend his 90-second routine looking immensely uncomfortable, trading in his usual tension for some real fluidity in the waltz with Witney. Plus, if Chris and Witney were safe this week, there should be no reason to see them booted in next week’s double elimination.

MOST ENJOYABLE | Willow Shields and pro Mark Ballas (Salsa) — Much like Sharna Burgess has masterfully adapted her choreography to suit Noah Galloway’s limitations, Mark has managed to create routines that are fun, creative and evocative, without ever forcing 14-year-old Willow to be too sexy. He pulled off that feat once again this week with a light-hearted salsa routine, which allowed Willow to shake her hips and show off her flexibility (that split at the end had me reaching for the ibuprofen), all while keeping things youthful.

WORST OF THE NIGHT | Noah Galloway and pro Sharna Burgess (Rumba) — Hear me out: I realize Noah is a total gentleman, and I understand why he didn’t appreciate the bad edit that his partner got in the rehearsal package. However, even if that irritation hadn’t been weighing on Noah’s mind, I’m still not sure the routine would have blown me away. I was expecting Sharna to deliver much more content in her choreography for Noah, but instead left the routine feeling that even less movement had been included than in past weeks. Perhaps it was merely the genre that didn’t suit Noah and Sharna, but this week’s rumba left a lot to be desired.

“I’ve learned so much about me. I’ve never done this before in my life,” LaBelle said of her time on the show. “I’ve learned a few steps, and I made a great friend in Artem. The audience has been supporting me like crazy.”

OK, your turn. Did Patti and Artem deserve to get booted? Which dance was your favorite of the night? Hit the comments with your thoughts!