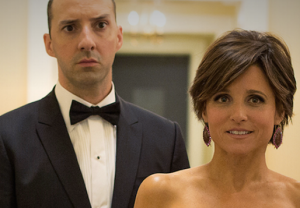 On Sunday’s Veep, Selina’s long-suffering aide Gary stopped being polite and started getting really angry at his boss, resulting in a jaw-dropping confrontation that was three years in the making. At turns heartbreaking and hilarious, the showdown — expertly acted by Emmy winners Julia Louis-Dreyfuss and Tony Hale — dramatically altered the power dynamic between the two characters, while also setting up a doozy of a mystery: What did Selina do on that fateful Labor Day, and how exactly did Gary cover (or clean) it up?

Below, Hale takes us behind the scenes of the epic clash, teases the fallout to come, and sheds light on that Labor Day riddle.

TVLINE | What was your reaction when you got the script and read the fight scene?
Gary is constantly getting beat up, so anytime there’s an opportunity for a blowup where he can actually express himself, I’m in. I’m game. It was nice to be able to let loose.

TVLINE | Did you and Julia spend a lot of time working on the scene to get it just right?
That’s what’s so great about our show — we have a lot of rehearsal time. This was a really [important] scene, and we wanted to make sure it gelled, so we worked on it in for a while to find the flow of it. It’s so fun to work with somebody who’s on the same page.

TVLINE | Were you surprised by Gary’s outburst?
Yeah. I mean, the fact that he says, “I’m f—ing everything to you” is just… Gary would never in his wildest dreams have thought to talk to his queen that way. That was a nuclear bomb. It was fun to be able to say that kind of stuff, and then just kind of retract and find ways to come off of it. It was really, really fun to do.

TVLINE | I feel like the first three seasons have been building to this moment. Did you feel the weight of it while you were shooting it?
Yeah. But keep in mind, as far as Gary’s concerned, she should’ve been president years ago. The country is just waking up to how cherished she is. Any kind of obscenities that have been thrown at him from her, he just doesn’t hear it. He doesn’t see it. He’s got huge rose-colored glasses on. But when [the abuse] comes from everyone else, he does see it. So he’ll blow up at Dan or Jonah, but never Selina. But when she referred to him as “a middle-aged man who gets me my wipes,” he had to actually face what she thought of him. And that was in contrast to how he saw himself the entire time, which was as her “first lady.” Then he just lost it.

TVLINE | The argument is diffused when she is reminded of what he did for her on Labor Day. What exactly happened on Labor Day?
I don’t know. That’s what’s kind of fun. It might be revealed down the road. Something serious must’ve went down to silence Selina like that.

TVLINE | Were you told what happened on Labor Day to help with the subtext?
We both agreed that it held a tremendous amount of weight [if we didn’t know].

TVLINE | Do you think she backs down out of fear that Gary might use this information to hurt her?
Oh, yeah. Gary’s got a lot of secrets. Gary’s known her a long time and, as we know, she’s not the purest lady. He knows all the skeletons. He knows all the secrets. But that secret, whatever it is, trumps them all.

TVLINE | I also read it as her being reminded of the lengths to which Gary would go to to protect her, kind of like, “Oh, right. He does do more than fetch my hand lotion.”
Totally. Exactly. In the heat of the moment, there probably was a realization in her mind that he’s more than just a lap dog.

TVLINE | How does this impact their relationship moving forward?
First off, the fact that Gary has been separated from Selina now that she’s President has been emotional suicide for him. He would rather be attacked and cussed at and abused than be distanced from her. After this [fight], they’re close again. He’s around her again. But let me tell you, when you’re President of the United States, Gary Walsh is not the guy you want around you. [Laughs] That’s a recipe for disaster.

TVLINE | Burning question not specifically related to this episode: What’s in Gary’s bag?
What’s not in Gary’s bag. I think Gary would be offended if he knew what Tony Hale had in his bag: Empty water bottles and sticks of gum. [Laughs] In Gary’s world, I always had this vision that he comes home at night and says into a recorder everything that is in the bag. And then he puts a blindfold on, plays the tape, and just starts reaching in the bag for the items. Every single night he does it just to be prepared for the next day.

TVLINE | It was announced last week that your fearless leader, Armando Iannucci, would not be returning for the show’s just-ordered fourth season. How are you feeling about the change? Do you have confidence in new showrunner, [Curb Your Enthusiasm EP] David Mandel?
I have confidence because of what he has previously worked on, but also because of his relationship with Julia. She really respects him, she’s worked with him [on Seinfeld]. I’m excited to see what ideas he has. And we’re all going to miss Armando. But I so respect his decision. And we’re going to see him again.