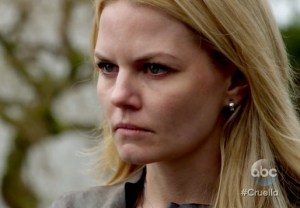 The Savior may need some saving, folks.

This week on ABC’s Once Upon a Time, Cruella de vil kidnapped Henry, then delivered to his mothers an ultimatum: Kill the Author, or your kid gets a most unhappy ending.

Regina, Emma, the Charmings and Hook quickly plotted to save Henry, by dividing up to search for the boy while also seeking out the Author to acquire intel on Cruella. When Snow and David found the scribe aka Isaac, he maintained that he was trying to save the world from Cruella, yet not even he saw this ending coming — that Gold would use the fur-rocious sorceress to turn the Savior dark. But how?

Because the Author had long ago, after they had met under romantic-turned-tragic circumstances, written it so that Cruella could never take a life — meaning, there is no way she could actually kill Henry, if push came to shove. But Emma doesn’t know that Cruella is defenseless, so when the ladies face off at cliffside, where Cru was holding Henry at gunpoint, Emma did what she believed was necessary and used her powers to zap Cruella off the cliff, to her black-and-white and red all over death.

If you think that decision was a pivotal one for Emma, nudging her as it did precisely in the direction Gold wants and needs her to go, you’d be quite right.

“The audience should be very, very concerned that Emma has irrevocably headed down a path” — and not one dappled with sunshine and flanked by singing bluebirds, series co-creator Adam Horowitz told TVLine as part of our May Sweeps Preview special.

“If you thought Emma was in danger of going dark from learning what her parents did [to Maleficent”s daughter Lily], now we have to deal with the danger based on her own actions,” Horowitz continues. To be clear: “Emma crossed a line.”

Whether there is any salvation for the wayward savior, if there is any hope of detouring her from this very dark path, will be seen in the weeks to come. Says Horowitz, “The final four hours of the season [including the two-hour finale airing May 10] force us to grapple with the action Emma takes.”

Also of note in this week’s episode: Rumplestiltskin revealed (no, like really revealed) to Belle that his lifetime of misdeeds has turned his heart almost completely black, and that if he loses the last little bit of “red” in it, he will forever lose his ability to love. (Alas, to whom he actually was speaking was Belle as controlled by Regina, since the bookish beauty had allowed the Evil Queen to pluck out her heart in the name of a greater good.)

What did you think of “Sympathy for the de Vil,” the Cruella/Isaac backstory and the final, deadly twist?