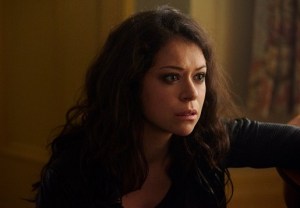 How do you give the versatile Tatiana Maslany a new acting challenge? If you’re Orphan Black, you ask her to… become a scorpion?

On Saturday’s Season 3 premiere, on top of playing a Sarah-as-Rachel vs. Alison-as-Sarah scene, the actress also took on the task of voicing Helena’s new imaginary arthropod friend.

Below, co-creator Graeme Manson reveals the story behind the strange twist for the captured seestra. He also answers TVLine’s burning questions about the darker side of Delphine, the new female clone, a “twisted” adventure for Alison and much more.

TVLINE | I wanted to start by talking about my new favorite character, the scorpion. How did the idea for that originate?
[Co-creator] John [Fawcett] thought Helena needed a little buddy who’s a scorpion, and I was like, “You’re crazy. That sounds stupid.” And then he said, “Oh, no, no, it talks.” [Laughs] I said, “Oh, a talking scorpion. Why didn’t you say that to begin with?” [Laughs] So it did originate with John, and it was one of those ideas that we often have where someone throws out an idea and everyone thinks it’s dumb until we talk about it a little more. the impetus was to give Helena, in this difficult situation she finds herself, which is a familiar situation to her if you think back on her life, being in prison, having her freewill taken away and turned and twisted. It’s happened to her before. She just got a little bit of a respite and started to feel normal and it’s happened again. So it was like the scorpion’s been with her before. It’s her little scorpion. It’s her little piece of conscience, a little devil on the shoulder. And of course his name is Pupok. [Laughs] You can look it up in your Ukrainian translator to see what it means. [Editor’s note: bellybutton!] 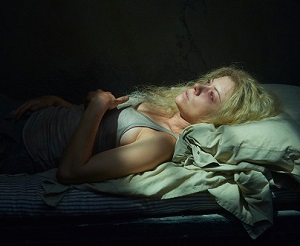 TVLINE | Is that what she says in the premiere when she sees it?
Yeah. She says something about, “I remember you, Pupok.” You fully won’t get it right away until you spend a little time with her.

TVLINE | Who’s the voice of the scorpion? Is that someone we might know?
It was. From the very beginning we wanted Tat to voice the scorpion. And she and John talked about it a lot and worked on it. We went through a lot of like, “What should the scorpion sound like?” Because it can really be anything. He hasn’t got a face. Like he hasn’t got some like [visual] effects mouth that’s moving or anything. They hit on the idea together of the scorpion actually having a sound, you’d know when it’s coming. He kind of purrs and clicks and has this sound. Tat did all those noises to give it voice. She like beatboxed that thing. I would speak in like a Bronx accent when I was doing the scorpion, but nobody really bought what I was selling. [Laughs]

TVLINE | We also met a new clone, Crystal, and found out that there were supposedly six others that were killed in the Helsinki operation. In your heads, have you and John landed on a number for how many clones there are total?
It’s a mystery to our girls, it’s a mystery to Sarah. It could even be argued that it’s a mystery to the Dyad itself or it could be a mystery. The answer is it’s convenient for us not to have a number. Maybe one day, we’ll come on 42, the answer to everything, but I don’t know. [Laughs]

TVLINE | Was the Dyad aware of Crystal before they intercepted Rudy with her?
Yeah. She’s not some off-the-radar clone, no.

TVLINE | Is she aware that she’s a clone? Or is she just out there in the world and hasn’t been introduced into what’s happening?
All the Leda clones are not self-aware, except our little circle of clone club. And the only ones that were really the wild ones were Sarah and Helena. The others are within the experiment. 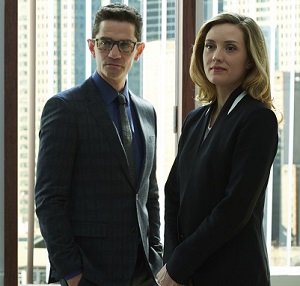 TVLINE | Sarah now knows about Helsinki and what Rachel and Ferdinand did. How is she going to use that information? That’s a pretty big thing she got clued into.
It’s nice to give the experiment a sense of history, and it’s good to know the stakes, to reiterate the stakes to these guys. If Topside is the cabal that runs Dyad or that controls Dyad, it serves to show us how ruthless they are at the very top. Beyond their research institute Dyad, Topside is probably a many hydra of many interests.

TVLINE | Let’s talk about Rachel. She survived this pencil stabbing, but she could be incapacitated in some way. What can you say about her condition and what that means for her role at Dyad?
We’re interested in taking that character of Rachel, who’s so cool, composed and in control and has this sense of the elitism, and it’s pretty interesting to take her and knock her down a peg. To put her in the situation of losing her dignity and finding herself essentially in the same position Sarah was in. She’s now in the basement of Dyad.

TVLINE | Has she been demoted? She no longer has any kind of authoritative role?
We’ll have to wait and see what happens when she wakes up.

TVLINE | Did you land on what kind of eye-patch she’s going to have?
[Laughs] I would like Rhinestones. Some day.

TVLINE | I remember you had some fun ideas after the Season 2 finale.
[Laughs] Yeah, everybody’s had a lot of Rachel eye-patch ideas. But she’s got some recovery ahead of her. She’s not going to pop up tomorrow in her rhinestone eye patch.

TVLINE | Meanwhile, Delphine has taken over some of her duties and displayed this whole new side of herself. Kind of cold, kind of brutal, especially in her interaction with Rachel. How dark is Delphine going to get?
Delphine’s in this conundrum, in this position, that a number of our characters are where they’re torn between their heart and their allegiances. The heart hasn’t changed for Delphine. Telling Cosima that they can’t be together, you see how hard that is for her, for both of them. But the real question for us in the writers’ room was, “OK, Delphine made this promise. She made this promise to Cosima that she would keep her sisters safe and love them all equally. So how far will she go to do that?”

TVLINE | We’ve seen that, aside from Sarah and Helena, all the female clones are sterile. Does that also apply to the males?
What is up with the males, what is up with their biology and psychology, that’s part of the mystery we’re pursuing this year, so you’re going to have to wait and see. 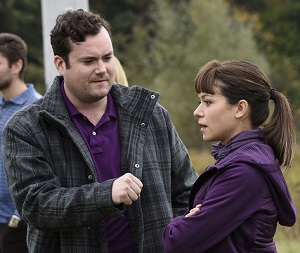 TVLINE | Alison now wants to run for school trustee. What’s in store for her and Donnie in their new suburban adventure?
The fun thing about Alison’s journey this year is that she and Donnie are well bonded over the death of Dr. Leekie. Team Hendrix it is going forward. We’ve seen them mistrusting and bickering with each other for a couple seasons and now the family has come together. It’s nice to see that suburban unit come together. But of course, it’s Alison and Donnie, and it’s going to be a bent and twisted version of suburban marriage, for sure. [Laughs]

Orphan Black fans, what did you think of the twisty, turny Season 3 premiere?