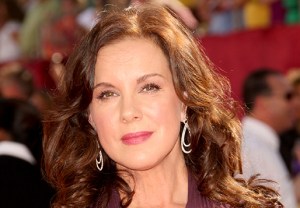 Preacher‘s congregation is quickly growing, and Elizabeth Perkins is its newest member.

Based on Garth Ennis and Steve Dillon’s 1990s comic, Preacher focuses on Rev. Jesse Custer, a conflicted Texas preacher who embarks on a journey to find God. Perkins will play Vyla Quinncannon, Jesse’s strong-willed mother who owns the local slaughterhouse.

Since ending her run on Weeds, Perkins has appeared on The Closer, How to Get Away With Murder and ABC’s short-lived sitcom How to Live With Your Parents (For the Rest of Your Life).

* Spike TV is teaming up with Jerry Bruckheimer (The Amazing Race, CSI) to develop Harvest, Deadline reports, a drama series about a cemetery groundskeeper whose life is upturned when his estranged father shows up.

* In News That Doesn’t Really Surprise Anyone, WE tv has cancelled its reality series Sex Box — in which struggling couples do the deed in a box before getting therapy — after five episodes.