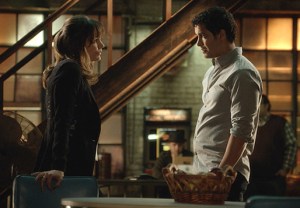 When next Monday’s season finale of Scorpion begins (CBS, 9/8c), Walter will be fighting for his life as his car teeters on the edge of a cliff.

What better time for Paige to pour her heart out?

Indeed, Katharine McPhee’s waitress-turned-government employee will finally tell Walter her true feelings for him — though whether that’s a good or bad thing remains to be seen.

“There is a secret revealed,” executive producer Nick Santora told TVLine of the season ender. “Paige does reveal how she feels about Walter.”

It’s hard to imagine that Paige’s confession to Walter will be all warm and fuzzy, given where they left things at the end of this week’s episode. After months of will-they-won’t-they tension (and a number of unwelcome appearances from Paige’s baby daddy, Drew), Paige left the Scorpion team to protect her son’s safety, insulting Walter’s very existence as she exited.

Still, exec producer Nick Wootton wouldn’t say much about how the duo’s heart-to-heart will go down. “We do something that we have not done all season long — that certain fans have been waiting for — in the finale,” Wootton hinted, before adding, “I will not say what that is.”

To most viewers, the chemistry between Walter and Paige has been evident since the series premiere, and the constant return of Drew has been just one of a few obstacles in the couple’s way. (The other major roadblock? Walter doesn’t freakin’ feel anything.)

But Wootton asserted that the Walter/Paige/Drew love triangle is more than just plain geometry.

“We’ve used it as a way to show Walter in the middle of a very emotional relationship for which he is not particularly so qualified,” Wootton said. “We’ve been able to open up different facets of Walter, to show him in complications that he may never have dealt with before. That’s how we’ve kept it fresh.”

And while there are many roadblocks yet to come in Walter and Paige’s relationship — a list that possibly includes Paige’s finale secret — Santora assured fans of the romance that the payoff will be worth the wait.

“We want to keep it progressing and see them really learn to know each other, respect each other, care for each other,” Santora said. “And then eventually — if we can pull it off — one day possibly fall in love with each other.”

Scorpion fans, what do you think Paige’s secret could be? Hit the comments with your thoughts and theories!