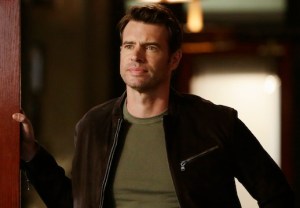 This week on ABC’s Scandal, Olivia and others grappled with doing what’s right — though in the end at least one “white hat” was rewarded for their behavior with splatters of red.

And that unfortunate individual was… Jake Ballard (played by Scott Foley).

The episode opened with Rowan — “just” a paleontologist at the Smithsonian — “asking” Olivia to handle his headache (being David Rosen’s targeting of B613). Or is she willing to take down President Grant with the super-spy org? After all, Papa Pope contends, Olivia believes not in people but that the republic must stand at all costs.

But Liv is undeterred by her fierce father’s three-hour deadline, and reasserts her support of David’s mission… though things get a bit dicey when Rosen asks Jake about Operation Remington, in which of course Fitz shot down a civilian airliner, on Rowan’s orders. (Gosh, that will never not sound icky.) Still, the white hats forged on, and Rowan even commended his daughter on evolving into a worthy opponent. But there will be blood, he assured her — and in the closing scene, that red stuff was drawn from Jake, who was assaulted at OPA by (sad trombone) Olivia/Alex’s lover, Russell (a twist that bums me out because he was a superior beau compared to Edison, and him being a “plant” is so expected from this show).

Is Jake in fact dead, from those multiple, obviously expertly delivered stab wounds? (Rowan and Quinn each sure seem to think so in the promo.) Or does he have Diggle and Felicity on speed-dial?

Elsewhere in the non-sweeps (!) hour: 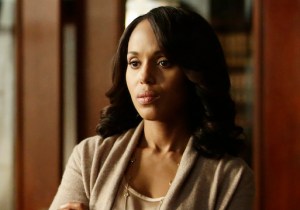 * The Russell reveal is especially sad given that he and “Alex” had just come to a sex-ayyyy understanding about how he can facilitate a non-complicated life for She Who’s Also Known as Olivia. That said, his ability to not freak the eff out about “losing time” (when Rowan drugged, or “drugged,” him) now makes a lot more sense.

* The White House was antsy to pass the Brandon Bill (named after the kid shot by a cop a few episodes ago) but needed VP Susan to break a tie — ‘cept she was really, really, really determined to read the entire 1,200-page doc and get answers to her many, many, many questions and Post-It Flags. After David and Mellie failed to “not feed the pigeon,” POTUS stepped in to lay down the law… only to hand his hungry veep a whole loaf of tasty bread. So as they rewrote the bill into something more than unenforceable compromises, Mellie announced her run for senator, to seize the news cycle/distract the press with a shiny object.

* Speaking of Brandon: Marcus Walker, the activist who butted heads with Liv at that stalemate in the streets, is running for mayor… when he secretly witnesses his mistress (aka the mayor’s wife!) get killed in her bedroom by some hit men. After discovering that the mayor ordered the hit and tried to frame Marcus for it, Olivia leveraged the politico to step down and endorse his rival. Marcus, though, chose justice over career and instead told all at the press conference, resulting in the mayor’s arrest and his own poisoned political career. But hey, Liv may need a new beau soon….

What did you think of the episode “I’m Just a Bill”?