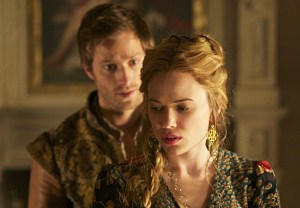 Francis and Mary’s relationship might still be a hot mess when Reign returns Thursday (The CW, 9/8c) — but the same can’t be said for another fan-favorite duo at French Court.

“We’re the happy couple now!” Jonathan Keltz tells TVLine of Leith and Greer. “Leith has been trying to get back to that dream he and Greer had for themselves in the beginning, which they never thought was possible. Now, with the annulment, he believes so much that the dream is possible; the dream is real.”

Of course, Greer isn’t the only woman in Leith’s life these days. He’s also been assigned to protect Princess Claude, an arrangement Keltz says will be “rife with hilarity and wonderful, witty banter.” 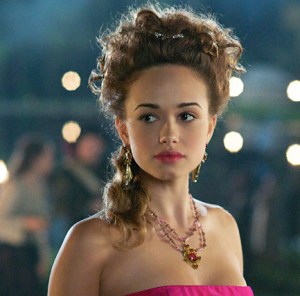 “Claude is somebody who, as we’ve seen over the past few episodes, is really a lovely person who’s been shaped by people’s perceptions of her,” Keltz explains. “Being treated like a sociopath by her own mother really affected her, but the fact that she remains sensitive and vulnerable is truly a testament to her character.”

And then there’s Leith’s involvement with the cardinal, which will test “how far [he’s] willing to compromise his morals and his friendships and his place in French Court for this love.”

Generally speaking, Keltz urges fans to brace themselves for the final episodes of Season 2, which will change… well, pretty much everything.

“There are some people returning from our past, as well as some new people arriving,” he teases. “The very foundation of French Court, England, Scotland — everything is about to change. … It’s going to re-shape who’s alive, who’s not, who’s here, who’s not and what the show and French Court even are moving forward.”

Reign fans, what are your hopes for the final episodes of Season 2? Drop a comment with your thoughts below.