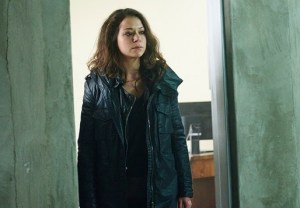 Apparently, things can get worse than a pencil to the eye and a near-death health scare for the Orphan Black sisterhood.

Arriving this Saturday at 9/8c, Season 3 of BBC America’s clone drama delivers “a good, strong beatdown on everyone, pretty much, physically [and] emotionally,” co-creator/director John Fawcett tells TVLine. “It’s important to really beat people down to allow them to rise again. We’re going to punish people and hurt them a bit.”

Eek. Among the not-so-warm-and-fuzzy plot developments: a set of dangerous new male clones (played by Ari Millen); a rift between Sarah and Mrs. S; a detrimental setback for Rachel and much more.

At least there’s a little romance in store for Sarah and a second chance at life for Cosima to soften the blow. And rejoice, the seestras will be spending more time together this season, Fawcett reveals.

TVLINE | Season 1 was conception, and Season 2 branched out more into Project Leda. What’s the overarching theme for Season 3?
With the introduction of Project Castor and the male clones, it’s certainly [about] jumping down that rabbit hole now. That’s a whole new aspect to the mystery of the existence of the girls, of who the original may be, of their biology. It’s still very much a mystery that is focused through the eyes of Sarah Manning, but this is a big new layer to the conspiracy.

TVLINE | In Season 2, you really expanded the world and delved into the mythology. What would say the balance is in Season 3 between the mythology and the more character-driven moments?
That’s a real balancing act, because it is a mystery and it is a heavily plotted show. We are a heavily plotted show that really loves its characters, so we are constantly trying to have storylines that propel the plot forward and then other storylines that intersect it that are smaller character stories. 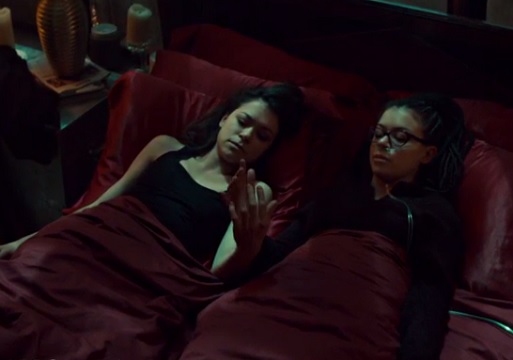 TVLINE | The storylines last season took Sarah and the other female clones in different directions. Can we expect to see more scenes of them together because, like Cosima said, they are stronger together?
Yes. As the show evolves, it’s nice to see the characters having their own stories, it really is, but at the same time, we are trying to solve a mystery. Inevitably, we have to draw help from all sources and from all the girls. Sarah’s a character who began as a very irresponsible, almost teenager [type] who has made a lot of bad decisions, isn’t a very good parent, and has had to step into a role where she wants to be a better mother and she wants to protect her child. Then it evolved beyond that. It’s not just about protecting her and her family; it’s about protecting her sisters and trying to get answers so that she can save her sister and save herself, to some degree. She’s evolved into, definitely, a bit more of a hero, even though she still has her faults. She’s not the perfect heroine. She’s still Sarah Manning.

TVLINE | Without breaking [star] Tatiana [Maslany], we can expect to see a bit more of her playing against herself?
A lot more. Yeah, a lot more.

TVLINE | What is Sarah’s main drive in the new season?
One of the biggest things is that at the end of Season 2, Mrs. S had to make a very difficult decision to protect Sarah and Kira and gave up Helena. And I don’t think that Mrs. S really knew the implications of what she was doing. Helena’s been taken by the military and by Project Castor, and that’s going to cause an awful lot of conflict between Sarah and Mrs. S, but also be the thing that drives Sarah at the beginning of the season, because I don’t think Sarah is going to sit still until she has Helena back. [She will] do whatever she can to protect Helena. 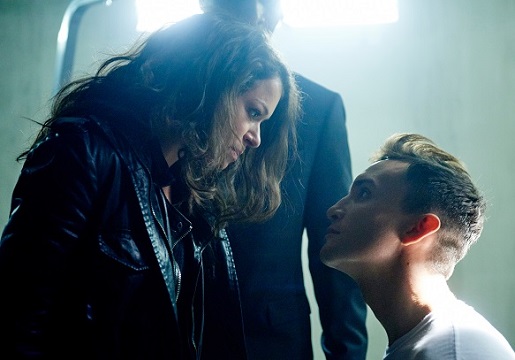 TVLINE | The male clones are a big threat to Sarah and her sisters. Is there room for one of them to maybe not be as lethal as the others? Or do they all have that military training engrained?
There’s a little less “nature versus nurture” with the men because they’ve all been brought up in a military background. But that doesn’t necessarily mean that they’re all… Even with our bad guys, I don’t think we just like painting them as “bad.” Part of the fun of the show is to take expectations and turn them on their head, to make left turns when people are expecting right turns. To take a serial killer, for example, and make her sympathetic.

TVLINE | What is Rachel’s status?
She’s alive. It was interesting because at the end of last season, [co-creator] Graeme [Manson] kept saying, “I want to kill her.” I was like, “Dude, really kill her. Like dead, dead.” He’s like, “We should kill somebody, don’t you think?” and I was like, “I don’t know if we should kill her.” A lot of the time, we sit around the table and people have idiotic ideas, and a lot of the time the most idiotic ideas are the ones that fly — and he had this idea that he wanted to launch a pencil into Rachel’s eye. When I expressed concern about killing her, he said, “OK. Then we should maim her, and in a pretty fundamental way.” I got behind that because I got very excited about the idea of taking a character who is above everyone, who has her s–t together, who has a lot of power and an ego the size of a planet, and really hurting her, to a place where she’s been stripped of her power and, in a way, her identity. To put her down at the bottom, and then see what happens. The thing that got me most excited about that — because I knew what having the rug pulled out from under that character [would do] — was it was going to offer Tat some amazing new challenges. 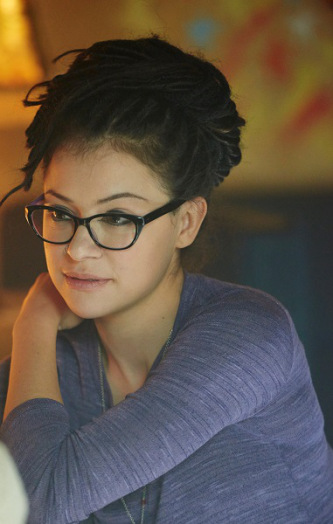 TVLINE | What about Cosima? She got this bit of hope at the end of last year, but how is she doing in the new season?
Cosima’s health is always an issue. It’s part of the thing that drives everyone, to try and solve these fundamental flaws with the girls. And as we’ll find out, the boys have physical, biological flaws of their own. Cosima, at the end of Season 2, had a very real brush with her own mortality and has had an experience that she can’t really explain. The starting point for that character this season is interesting because she is the science, the geek monkey. It’s very interesting to [someone like that] now looking for answers outside of science.

TVLINE | What is the dynamic like between Paul and Sarah? It was pretty tense last year, but he seemed to have gained back a  bit of trust by helping them out.
I don’t know if Sarah’s ever going to trust him again, especially if she figures out that he had anything to do with the Helena deal. It’s tough. They both, weirdly, have feelings for each other. It’s a star-crossed lovers kind of scenario, unfortunately, for those two.

TVLINE | Speaking of feelings: I was very relieved to see Cal in the trailer, because I know Michiel Huisman is an in-demand actor and his availability is always a question mark. What can we expect on the Cal/Sarah front?
A little more romance. A little bit more. He’s around for us. I like that character because, yes, he’s got some secrets, there are some shady aspects to his backstory, but ultimately he’s a good father. He’s not as caught up in the conspiracy as everyone else. It’s nice to have a character that you can kind of trust a  bit. Sarah’s got the hots for him. He’s a good-looking boy.

Stay tuned to TVLine for even more Orphan Black scoop!