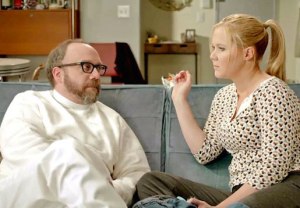 Ladies with an attitude, fellas who weren’t in the mood (for hanky panky with a swine). That little tweak on a classic Madonna lyric might be one way to describe the 74th Peabody Awards’ entertainment winners.

In announcing its latest honorees for excellence in electronic media, the organization noted a trend of “strong, multi-dimensional women” picking up prizes in 2015 and “affirming the continuing expansion of significant roles for women on television.” Among them: Comedy Central’s Inside Amy Schumer, The CW’s Jane the Virgin, and Sundance TV/The BBC’s The Honorable Woman.

FX also had cause for celebration, as it scored two wins thanks to Fargo and The Americans.

The Peabody Awards, based at the University of Georgia’s Grady College of Journalism and Mass Communication, are essentially the Pulitzers of electronic media, recognizing excellence in radio, TV and the blogosphere.

How do you feel about the 2015 Peabody winners? Any favorites make the cut? Any winners have you scratching your head? Sound off in the comments!