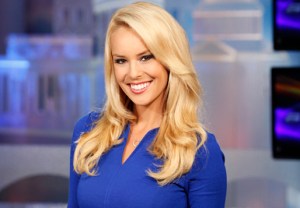 ESPN reporter Britt McHenry has been suspended for one week, following the release of her shocking on-camera confrontation with a parking attendant.

In case you missed the initial news, footage of McHenry verbally abusing a parking attendant made its way around the Internet on Thursday morning — and it was ugly.

Among other nasty remarks, McHenry asked the attendant, “Do you feel good about your job? So I could be a college dropout and do the same thing?” She then proceeded to ask, “Maybe if I was missing some teeth they would hire me, huh?”

McHenry concluded the heated exchange by saying, “I’m on television and you’re in a f—ing trailer, honey. Lose some weight, baby girl.” (Yeah… she’s kind of an awful person.)

She released the following “apology” several hours after the video went viral:

In an intense and stressful moment, I allowed my emotions to get the best of me and said some insulting and regrettable things. As frustrated as I was, I should always choose to be respectful and take the high road. I am so sorry for my actions and will learn from this mistake.

–
Watch McHenry’s full, NSFW tirade below, then drop a comment with your thoughts. Is a one-week suspension enough of a punishment for her outrageous behavior?