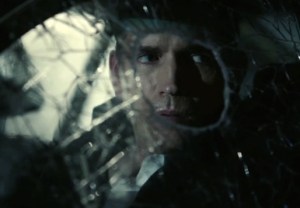 CBS’ Person of Interest this Tuesday night found yet another way to noodle with its narrative, by surprising us as well as John Reese with the truth about his heart-to-heart with onetime associate Detective Joss Carter.

The set-up for the episode had John digging up a cold case that Carter (played by original cast member-turned-Empire star Taraji P. Henson) was unable to solve, and pursuing it to its bitter end. Along the way, John flashed back to a Season 2 stakeout he and Carter once were on, and the conversation they shared — except, as it was chillingly revealed, the end of their talk was merely the imagination of a delusional John, as he bled and froze nearly to death following a snowy shootout.

POI showrunner Greg Plageman (whose previous credits include, yes, Cold Case) told TVLine at this week’s Paley Center for Media event, “We thought a cold case would be a wonderful way for Reese to pick up the baton from Carter and say, ‘I want to solve this for her.’ And then when it devolves from flashbacks to delusion, it becomes a very interesting dramatic point.”

Describing the result as “a truly psychological episode,” Plageman adds: “We like taking the flashback structure the audience is familiar with now and tricking you a bit, with what you’re looking at. But the idea was that you had this moment where [John and Joss] almost connected on that level, they got right to the edge of sharing, and then pulled back.”

Though John attempted to remember it differently, as life drained from him. 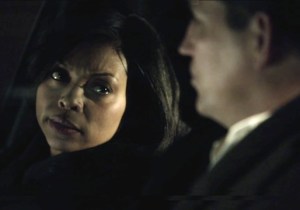 “[Carter is] someone he cared about very deeply, someone he could really connect with and share with,” Plageman notes. “And she is there to gently point out, ‘We didn’t ever really have that conversation — though we almost did. And I wish we had.'”

Series star Jim Caviezel — who was as pleasantly surprised as viewers by Henson’s encore — recalls shooting their closing car scenes in the actual cold, at the the end of New York’s brutal winter. “I’ll tell you, we burned oil to get that one done. It was really cold,” he shares. Not having the luxury of dilly dallying, however, can result in a laser-focused product, he says. “Sometimes you watch these things like, ‘Wow, we did that?’ Sometimes those turn out better than the ones you think about moment-to-moment, when instead you just let it happen.”

Though Caviezel had yet to see the completed episode at the time we spoke, his bosses were quick to sing his praises. As showrunner Jonah Nolan explains, “Jim has always wanted to dig into the character a little more, and we were looking for the right opportunity to do that. So he was very excited by the episode.

“It’s a massively challenging episode for him in particular,” the EP continues, “because his is a character who is not emotionally transparent, and he just inched towards that.” The result, Nolan offers, was “some of his best work on the show.”

What did you think of Carter’s return and that narrative twist?