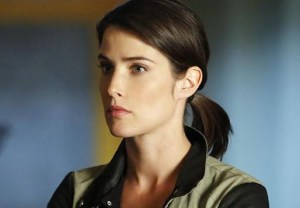 This week on Marvel’s Agents of S.H.I.E.L.D., we saw Maria Hill’s name, atop an old memorandum.  But soon, fans will see the former intelligence director in the flesh.

How I Met Your Mother alum Cobie Smulders, who portrays Hill in Marvel’s Avengers film franchise, announced on Tuesday’s Jimmy Kimmel Live! that she will appear in an upcoming episode of the ABC drama.

“There is one coming up,” Smulders said of her character’s next encore. “I pop in every now and again to link the two worlds — the movies and the TV show — together.”

Smulders most recently appeared on S.H.I.E.L.D. last April. Press PLAY on the video to see her Maria Hill-centric chat with Kimmel.

* Netflix on Wednesday announced Our Planet, an eight-part follow-up project to the BBC’s Planet Earth. Slated to debut in 2019, the documentary series will explore never-before-filmed wilderness areas and species.

* Dexter/Nashville alumna Rya Kihlstedt has joined NBC’s Heroes Reborn, though details of her role are being kept under wraps, EW.com reports.

* In other Disney XD news, the cable network has picked up Doctor Who Seasons 2 through 4, which will begin airing Saturday, May 9.

* Following the success of Killing Jesus, NatGeo has greenlit Saints & Strangers, a four-hour miniseries that tells the untold story of the founding of America, Deadline reports.