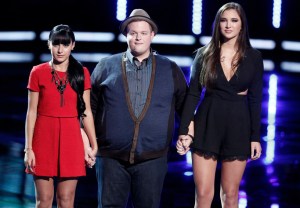 If you have access to iTunes (or the ability to Google some variation on the phrase “The Voice iTunes rankings”), then you probably had a good idea of which contestants might be at risk going into tonight’s Top 12 results telecast.

Still, Mark Burnett & Co. managed not to undermine all the suspense for a change this week. Yep, they unexpectedly sent to safety at the start of the hour the three vocalists (Kimberly, Sawyer and Meghan) who cracked the Top 5 of the streaming service’s Top 100 Singles Chart. Whataya know? Old dogs are all, “Look at me, balancing these plates on my nose!”

Too bad “America” (I DON’T EVEN KNOW WHO THESE PEOPLE ARE ANYMORE!), didn’t also learn some lessons between Seasons 7 and 8, as well. I mean, I know there’s only one country contestant left in Season 8, but dude was as off the mark on Monday night as a teacup poodle bounding onto the line of scrimmage during an NFL playoff game.

And yet Corey Kent White lives to fight another day, while one of Pharrell Williams’ trio of intriguing teenagers has been hurled into the Dumpster labelled “Too Interesting for the Mainstream.” Yeah, we knew that kid wasn’t gonna win it all, but not even making the Top 6 or 8???!!! I’m dialing 9-1-1 and reporting a crime against artistry, decency and everything we love about the great American songbook.

Before I light my torch and grab my brickbat, let’s cut to the results…

Bottom 3/”Save Me” Performances
TEAM PHARRELL: Mia Z — “Stormy Monday” — Grade: A (what a sublime, gritty vocal from such a wee one!)
TEAM ADAM: Brian Johnson — “Amazed” — Grade: K… for karaoke
TEAM ADAM: Deanna Johnson — “Make It Rain” — Grade: B- (some of those notes at the end were rougher than a New Jersey highway after a harsh winter)

The clearly lopsided showdown sent me into a fit of Twitter madness:

OK, your turn. What did you think of Top 12 results? Did America get it right with the Bottom 3? Was the right artist saved? If not, what would you have done differently? Sound off in the comments!