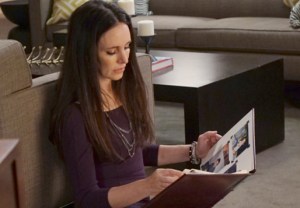 Revenge‘s future might still be up in the air, but Sunday’s clip show — which employed scenes from the past to paint a disturbing vision of the future — certainly felt like the lead-up to a series’ final run.

During a live TV interview — which, I should note, she expertly hijacked from Victoria — Emily took viewers on a walk down  Nightmare Lane, recalling the lives lost as a result of the ladies’ long-running feud. And as much as those flashback clips of Daniel made me miss the ol’ bastard, nothing could have prepared me for that gut-wrenching look back at Emily’s too-short life with Aiden. (I’m starting to think I’ll never get over his death, to be honest.)

That’s when Emily, summoning more shade than any Real Housewife I’ve ever seen, subtly accused Victoria of murder… on live, national television. “It’s in your hands,” she said to the camera, a moment about which I have two important thoughts: (1) The news doesn’t just play 24/7 in Times Square, much less out-loud, and (2) There’s no way Victoria would be caught slumming through that tourist trap. Not when she can afford a car service, damn it!

And did anyone else giggle when the reporter asked, “Did you ever have to harm anyone physically?” Please, that girl couldn’t get out of bed in the morning without threatening someone’s life.

TEAM VICTORIA | Though Margaux initially appeared to be a weak link in Victoria’s trio of wickedness — she even came clean about Em…anda causing her miscarriage — she realigned herself with the dark side after hearing Emily attack Victoria in her interview. (Oops! Guess that one kind of backfired on Emily.) That said, I’m kind of surprised Margaux agreed to lend her support; even Victoria’s best argument (“She selected my son for sacrifice long before he sacrificed himself”) was pretty weak.

NOLAN’S BLUNDER | Question: Does Nolan want to get himself and Emily exposed? For an alleged computer genius, letting Victoria get her hands on a hyper-incriminating flash drive was the work of a total noob. Emily was completely justified in lashing out at him, though it always hurt my heart to see best friends at odds; and don’t get me started on that scene between Jack and Nolan by the fireside. I don’t know where that bromance came from, but I never want it to leave.

WHO DAT? | And then there was this final moment: 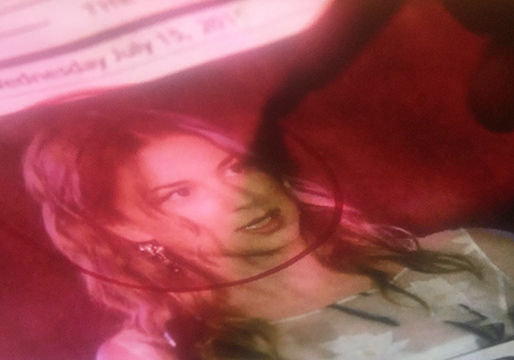 Any idea who might be circling Emily with her own damn Sharpie? And am I alone, or did that post-episode promo — “be there for the final four episodes” — make this feel very much like the last season? However you’re feeling as we head into the home stretch, drop a comment below.