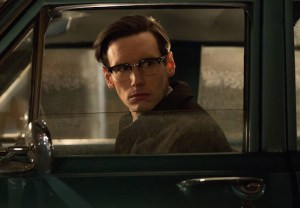 Since October, Fox’s Gotham has told a tale of unrequited love (or something) between Edward Nygma (played by Cory Michael Smith) and GCPD colleague Kristen Kringle (Chelsea Spack). But to what end?

Will this repeatedly crushed crush serve as merely a first catalyst toward the riddle-loving forensics whiz evolving into his fated alter ego, or is it the catalyst?

“She is the catalyst,” Gotham showrunner Bruno Heller assures TVLine. “And she’s an innocent one at that> That’s the tragedy of it — she doesn’t mean to break his heart.”

Regardless, Kristen’s malice-free dismissal of Edward’s obvious interest will steer him down a specific path. So, as the Fox series resumes its season this Monday at 8/7, Heller says, “What we are going to see play out is the birth of The Riddler.”

Were that the only of do-right Detective Jim Gordon’s (Ben McKenzie) concerns. But it isn’t. Not by a stretch. 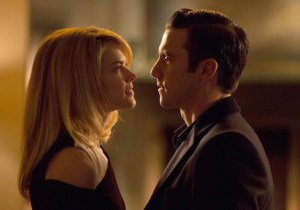 This Monday’s episode, titled “Beasts of Prey,” introduces Milo Ventimiglia (Heroes) as Jason Lennon aka the Ogre, a serial killer who targets young women in Gotham City. And wouldn’t you know it, Jim’s estranged fiancée falls within the predator’s wheelhouse. “It’s really a kind of perverse love story, between [Jason] and Barbara (Erin Richards) — and Gordon is hot on their trail,” says Heller. “We discover some very creepy things about [Jason] and Barbara, and Gordon is forced to make some very tough choices,” all leading to a “shocking” denouement.

Also looming out there as a threat not just to Gordon but Gotham at large is Fish Mooney (Jada Pinkett Smith), who upon being cast out by Falcone and her protegé 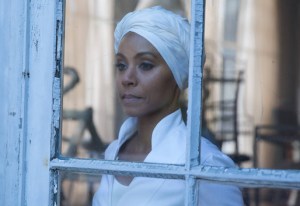 The Penguin did not abort her mission to be a player in the crime world but instead set out to prove herself anew, by enduring the crucible that turned out to be Dr. Dulmacher’s island prison.

“It’s certainly about reinventing herself and coming back twice as strong, twice as ambitious,” Heller says of the storyline. “Every strong villain wants to be the queen or the king of the underworld, but it’s an ambition that trips up a lot of people — if you’re striving for ultimate power, you always run the risk of ultimate defeat. And that’s essentially whats playing out now: Can Fish take control or not? Because the consequences of failure are dire.”

(Juxtaposing Fish’s name and the idea of “dire” consequences of course of course evokes Pinkett Smith’s recent, spoiler-esque comments about her run on the already renewed Fox drama. To that, Heller simply notes, “Gotham is a crazy place, and anything can happen.”) 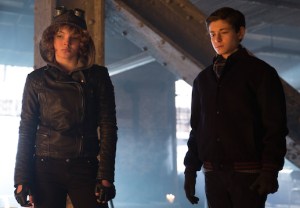 four episodes unspool: Alfred (Sean Pertwee) will bounce back from his hospitalization but not in time to prevent Bruce (David Mazouz), egged on by Selina (Camren Bicondova), from uncovering what’s terribly rotten in the belly of Wayne Enterprises. “As much as Alfred wants to stop that journey, Bruce is going to discover something about his family that is earth-shattering, really,” Heller hints. Gordon meanwhile, amidst combatting criminal threats outside the cop shop walls, will find that even with Commissioner Loeb’s coerced endorsement, loyalty among colleagues remains hard to come by.

“It’s a double-edged sword there, because the more power he gets there among the rank-and-file, the more he’s hated by his bosses,” Heller previews. And that will also threaten to derail, again, his partnership with Harvey (Donal Logue), who will be “forced to choose between his friendship with Gordon and his sense of self preservation.”