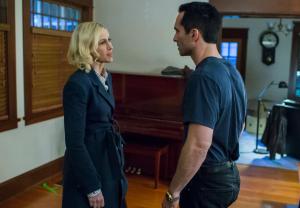 THE PERFORMANCE | We’ve long thought that one of the marvels of Farmiga’s gloriously unhinged work as Bates Motel’s Mommie Dearest is that she’s always, always acting on (at least!) two levels. And never was that stunning duality on better display than in this week’s episode.

When Romero tried to convince Norma that she had to give up the incriminating flash drive for which sleazebag Bob Paris seemed more than willing to kill, her portrayer illuminated not only her character’s outrage but also her desperation — with the motel going under (not to mention Norman going crazy), she needed something, anything to use as leverage against White Pine Bay’s ruthless power brokers. When she cut the deal of the title with Bob, Farmiga revealed her alter ego’s endearingly inappropriate sense of humor along with her sense of justice. (In exchange for her silence, she demanded an exit ramp from the dreaded bypass and billboards advertising the motel. “And,” she added hilariously, “I want a pool.”) And finally, when Norma’s sons confessed that her brother/rapist was in town — and had been for a while! — the actress made sure that we saw the hurt beneath the fury.

Most impressive of all, these are but a few examples of Farmiga’s two-tiered approach to Norma — in this hour alone! So at the end of the day, we probably shouldn’t really be naming her Performer of the Week, we should be nominating her for Performer of the Millennium. Who wants to be the first to second that motion?

HONORABLE MENTION | Throughout the first season of Netflix’s Unbreakable Kimmy Schmidt, leading lady Ellie Kemper maintains her character’s fierce optimism without veering into insufferable territory. That said, Kemper’s most impressive episodes are those that find Kimmy vulnerable and uncertain about the world around her. Episode 9, in which Kimmy’s 30th birthday party doesn’t live up to her expectations, is a particular standout for the actress. Kemper shifts from furious to incredulous to gleeful (and back again) with such ease, all the while delivering one-liners that remind us how truly naive Kimmy is. (“Sorry I don’t know Hanson’s current hits, Titus. I haven’t been to a Sam Goody since 1998!”) In just 26 minutes, Kemper proves that Kimmy Schmidt might be a tad breakable after all, but we actually prefer her that way.

HONORABLE MENTION | CBS’ Mom as of late has given Emmy winner Allison Janney rich, seriocomic material to mine, but this week Anna Faris movingly depicted Christy’s pathos in learning her mother leaped off the wagon. As Bonnie roared that she was done with sobriety, Faris’ alter ego found the gumption to volley back, “Then you’re done with me, and you’re done with your grandchildren.” Later, when Marjorie tried to console Christy, Faris’ slumped posture showed her character’s ache as she uttered, “That’s easy for you to say, but she’s not your mother. And, like an idiot, I thought she was finally mine.” And during a closing phone call, Faris worked the weighty pauses as Christy processed Bonnie’s DUI, mustering the courage to make her mom stew in the slammer overnight, and then privately vented her distress into a pillow.

HONORABLE MENTION | Let the Emmy buzz for Bob Odenkirk begin right… now. Jimmy McGill’s bingo breakdown in this week’s Better Call Saul finale was absolutely exquisite. The extended monologue about his cheating ex-wife and the “Chicago sunroof” that forced his Windy City exit gave us more of his backstory than the rest of Better Call Saul Season 1 combined, and Odenkirk’s vulnerable delivery helped reinforce the character’s insecurities about public perception and the measure of a man.